The prosecution in the trial of the French Polynesian president Gaston Flosse has called for him to be given a two-year jail sentence and a 110,000 US dollar fine for abuse of public funds.

The criminal court in Papeete has been hearing the case of a total of six people accused of corruption over an atoll purchase 12 years ago.

They are jointly accused of having abused public funds by buying Anuanuraro atoll off a leading pearl producer, Robert Wan, for nine million US dollars which was five times its value. 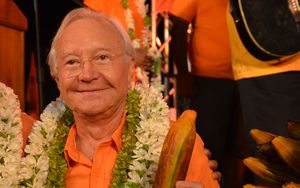 The prosecution also wants a two-year jail sentence for Mr Wan, who is one of the territory's richest people.

Local radio says a verdict is not expected until October.

The prosecution says it will leave it to the judge to determine the penalties for key ministers at the time, such as Gaston Tong Sang, Georges Puchon and Edouard Fritch.

The defence has called for their acquittal, saying the valuations were wrong.

Gaston Flosse, who is the politician within the French system with the largest number of convictions, has been sentenced to prison in several corruption cases, some of them for crimes dating back more than 20 years.

However, the veteran politician has appeals pending and remains free until any of the sentences is confirmed.