The French Polynesian government says manipulation by the opposition was behind a demostration on Hao atoll against a huge aquaculture project of a Chinese company.

The action prompted the president and four ministers to spend two days on Hao in an effort to keep the project on track.

At the beginning of the year, the government signed a deal with Tian Rui International Investment for fish farms that would see investments worth 1.7 billion US dollars and create about 2,000 jobs. 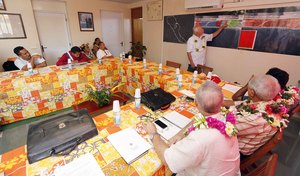 The project was to go ahead on Makemo but last month, it was announced that it would be switched to Hao.

Hao atoll had been considered for fish farming for years, but last year Makemo was picked for the Chinese project because of concerns with the nuclear and physical pollution on the atoll.