The United Front for a Democratic Fiji says the name of the regime's new political party remains stolen from a previous party. 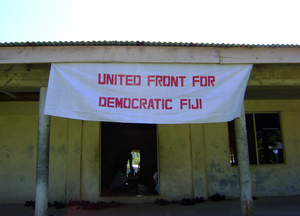 One of them was regarding the use of a previously active political party's name which appeared to be in breach of the Political Parties Decree.

Mr Saneem found that the former party's application for registration was not complete.

Meanwhile, the General Secretary of the Fiji First party, Aiyaz Sayed-Khaiyum says the name is different to that of the other party which has a numeral in its name.

"That's just a matter of interpretation, it's still called Fiji First, whichever way you look at it, and it's too close for the registrar to allow a second party to be named the same."

The spokesperson for the United Front for a Democratic Fiji, Mick Beddoes.