The New Zealand Prime Minister has landed in Samoa beginning the first leg of his Pacific mission. 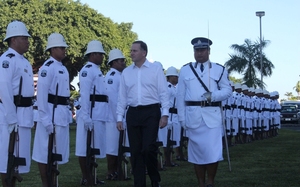 Accompanied by a large delegation of MPs and pacific community leaders, he will visit regions affected by the 2009 Tsunami and 2012 Cyclone Evan.

New Zealand contributed almost $19 million US dollars towards recovery and rebuild efforts after the disasters.

Mr Key plans to discuss New Zealand's financial aid towards Samoa's tourism industry and the Small Island Development States conference which will be hosted by Samoa later this year.

He will attend the 52nd Independence Day opening ceremony at Parliament this morning.

"Overall it's just good to be here and to be part of the celebrations. This is a country that's been independent since 1962. New Zealand has a long history here. Nearly 150,000 Samoans call New Zealand home. So there's a very deep connection of course between Samoa and New Zealand."

He will also visit Tonga and Niue later this week.