A New Zealand pilot, who has proposed a way forward in a long-running dispute between Tonga and New Zealand over a Chinese plane, says no headway was made at a meeting in Wellington yesterday involving Tonga's deputy prime minister, Samiu Vaipulu.

Rodger McCutcheon says the MA60 aircraft is safe and can easily be re-certified to satisfy demands by the New Zealand foreign minister Murray McCully.

Mr McCully issued a travel advisory over the plane and suspended tourism aid to Tonga when China gifted it the plane in 2012.

Mr McCutcheon says his solution is to get respected New Zealand pilots to test fly the plane and oversee its re-certification.

He says China is happy with the arrangement, but Mr McCully is yet to be convinced.

"He has his advisors and you know I think it's best that he and Samiu work through that. What I'm trying to do here is the way forward. We have the way forward and hopefully all parties will get together and agree that."

The New Zealand foreign minister says he stands ready to help Tonga implement the findings of a World Bank report, despite failing to reach an agreement yesterday on a contoversial plane.

Mr McCully and the Tongan Prime Minister Lord Tu'ivakano announced the industry-wide review in March, and both countries now have copies of the draft report. 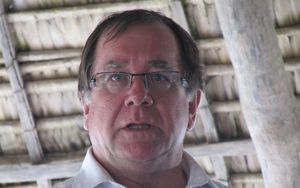 Mr Vaipulu criticised the World Bank for not consulting him over the controverisal plane before compiling its report, and he met with Murray McCully yesterday with all his documentation on the plane.

Mr McCully could not agree the plane was certified correctly and is safe.

The minister says New Zealand undertook to support the implementation of the findings of the report, and now he has received a copy of it, he will be writing to the Tongan Government to reconfirm his willingness to assist.