The Brodsky Quartet was last here in 2015, led by violinist Daniel Rowland.

He has recently been replaced by a new 1st violinist, Gina McCormack and their current Australasian tour is her first with them. 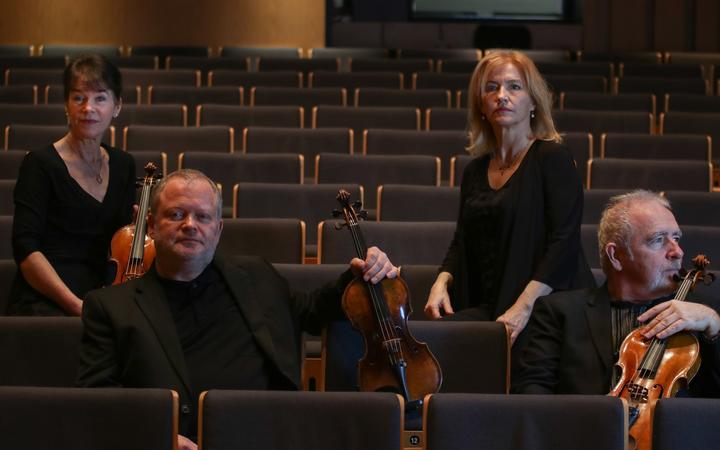 Gina McCormack’s a very experienced violinist, having led other string quartets and also has a significant solo career. There was considerable interest in how she and the other Brodskys would work together and our reviewer was delighted.

McCormack has a very beautiful sound and is a great match with the other three, leading unobtrusively. All evening there was a wonderful ensemble balance and unanimity of purpose.

The programme was called 'Rhythm and Texture' and comprised four short works in the first half and Ravel after the interval. Violist Paul Cassidy introduced the music from the stage and noted that the first half “sets up” the rhythms and textures of the Ravel.

They began with Metro Chabacano by Mexican Javier Alvarez, minimalist in style and an uneasy and edgy opening, not ideal in the MFC acoustic and not a very convincing work.

The rest of the first half had a theme of the night and next was a charming little Lullaby by Gershwin, the inventive small piece showing off Gina McCormack’s lovely sound.

Then it was back to Mexico to the teacher of Alvarez, Mario Lavista, the “granddaddy” of Mexican composers.

His Reflejos de la Noche, (Reflections of the Night) is “night music” and Lavista uses only string harmonics.

The effect is magical and otherworldly with occasional chirrups from the South American night, all beautifully controlled by the Brodsky Quartet.

A very atmospheric first half ended with Osvaldo Golijov’s Tenebrae (2003).

Born in 1960, Golijov grew up in a Jewish family in Argentina listening to chamber music, Jewish religious and klezmer music and Piazzolla’s tangos.

He then lived in Israel and all these influences are there in his music.

Golijov’s direct inspirations were witnessing with his son a violent fatal explosion of a bus in Israel and then a few days later at New York’s new Planetarium seeing earth as a beautiful blue dot in space.

He explains: “I wanted to write a piece that could be listened to from different perspectives, ‘from afar’ as a beautiful surface and up close as music full of pain.” He’s borrowed Couperin’s music for Tenebrae.

This was a beautiful performance by the Brodsky Quartet, as multi-layered and emotionally complex as the work itself and at the end they “held” the audience for several seconds of silence before the very appreciative applause.

Ravel’s String Quartet was played after the interval.

Theirs was playing full of rhythmic elasticity and grace, with marvellous momentum and clear, strong pizzicato in the second movement. In the slow third their pianissimo was a whisper, which emphasized the dramatic moments when they came, and the rapid finale was breath-takingly fleet and light.

They stayed in France and reinforced the “night” theme with a well-chosen encore of Debussy’s little Beau Soir - a “beautiful evening” indeed.