Upstage, a New Zealand made musical film, has won a top prize at the first Creation International Film Festival in Canada.

CIFF offers a chance for indie works to be screened, reviewed and judged by a panel of Canadian award winning film makers.

Upstage, written and musically directed by Wellington musician Michael Nicholas Williams, was a labour of love. He filmed it nearly four years ago on a tight self-funded budget with a cast of friends.

It tells the story of a cast rehearsing a new musical version of Wuthering Heights, set on the Tarawera Volcano. But it goes horribly wrong.

A lot of the plot is based on true stories that have happened in the rehearsal room during Michael’s career spanning 35 years.

“The idea came from the bad dress rehearsal, great opening night legend that we all cling to,” Michael says.

The freelance Musical Director is currently in Tokyo working on Ken Hill’s Phantom of the Opera with Upstage cast member and former RNZ host Lloyd Scott. He heard about the nomination for the award while on a lunch break for Phantom.

“I got the email saying it [Upstage] was nominated and then I just kept checking my phone because I knew the final decisions were being made before the end of August,” Michael says. “I'd just finished packing up my hotel room in Auckland when I saw the results on Facebook.” 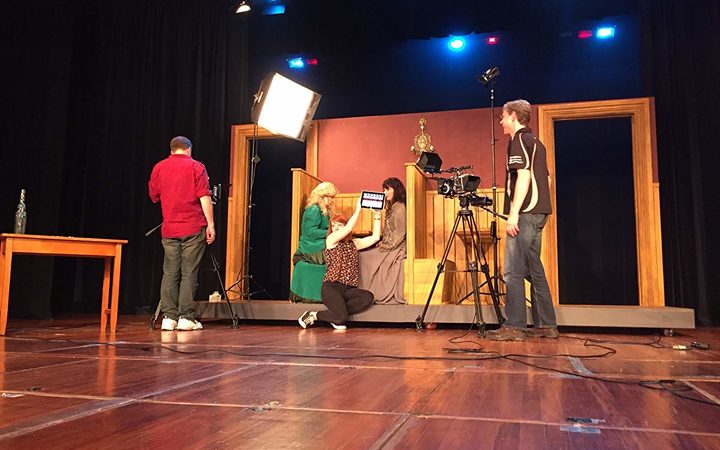 He was thrilled with the result as the film still hasn’t received its final sound mix. It’s the next step for Michael, who hopes Upstage will be able to have a public screening early next year.

Playwright Emma Kinane, Michael’s partner, was closely involved in Upstage. Recently it was announced her award winning play Anahera is to be read at the Vibrant 2018 Festival in October in the UK.

Anahera is a contemporary thriller about a Maori social worker trying to assist a dysfunctional middle class family who refuse to accept her help. It had its world premiere at Circa in 2017.