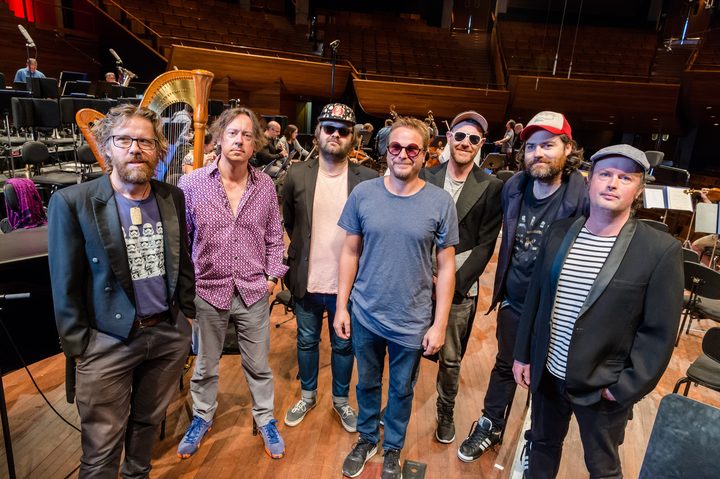 The Phoenix Foundation and The NZSO. Photo: Supplied

Is it an orchestral concert or a rock gig? Fans should expect both when they flock to hear the New Zealand Symphony Orchestra and psychedelic pop rock group The Phoenix Foundation playing together this month in Wellington, Auckland, Christchurch, and Dunedin. Top New Zealand composers have been invited to orchestrate the band’s famous tunes. The concerts coincide with the 20th anniversary of Sam Scott, Luke Buda and Conrad Wedde forming The Phoenix Foundation at Wellington High School in 1998.

Upbeat’s David Morriss talks to composer Gareth Farr  and Phoenix Foundation member Luke Buda about bringing orchestral backing to the band’s musical foundation. Gareth is one of a team of composers who have created the orchestrations for the NZSO’s tour with the band.

This is Gareth Farr’s fourth time arranging for the combination of band and orchestra and says it’s “hugely difficult”. “You’ve got basically two beasts, which operate in very, very different ways, to tame.”

His first venture into this area was bringing together the music of The Muttonbirds and the NZSO at a vineyard concert. “I think I let it get out of control a little bit. I was so excited about working with Don [McGlashan] and adding orchestra that I just went so over the top and I got too inventive. There was so much going on!”

He learnt from that experience and took a less intense approach to a later televised Auckland Philharmonia Orchestra and Evermore collaboration where he knew beforehand that the orchestra audio would be mixed down and not especially prominent. “It was the glamour of having all of these sweeping strings behind the band but not really hearing much. I knew that, so I knew not to put too much into it. That wasn’t hugely enjoyable for me because I didn’t really get to use my imagination."

For the NZSO/Phoenix Foundation concerts Gareth thinks he’s got the balance about right with how he’s embellished the band’s already complex material. Luke agrees and feels that Gareth has really captured the urgent driving rhythm of the Phoenix Foundation songs ‘Give Up Your Dreams’ and ‘Buffalo’.

There’re two parts to Gareth’s process for adding orchestra to band. “You reinforce the lines that are already there. If there’s a guitar melody you can double it in the woodwind or strings or whatever… that’s what you’re doing, assigning melody lines to instruments.”

Once that’s done the band can choose not to play that part as the orchestra is already covering it. “The other part of doing this sort of orchestration is coming up with a melody or an ostinato pattern that goes with it, is actually original but doesn’t draw too much attention to itself. The melodies that are written by the band members are still the most important ones.” 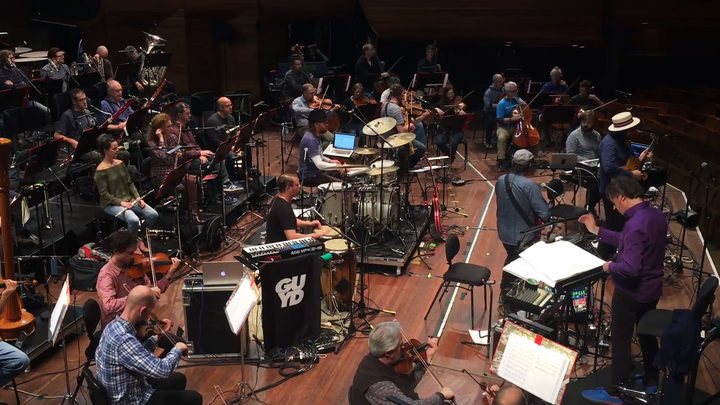 The Phoenix Foundation and The NZSO rehearsing ahead of their tour together. Photo: RNZ

The Phoenix Foundation approach to these anniversary concerts has been one of over preparation. Luke says that even if a sound is supposedly going to be covered by the NZSO the band has it ready in their electronic MIDI setup just in case. It’s all an effort to make sure they’re ready for this new situation. “I assume we’re more malleable than [the orchestra is]. We don’t have to print sixty copies of the score when we want to change something”.

As well as the band, the orchestra will also be amplified and Gareth has created his arrangements with microphones in mind. Without this approach instruments like the harp would be inaudible. “If you looked at this at face value” laughs Gareth, “not knowing about the amplification you could say this is terrible orchestration”.

Luke Buda suggests that the process of handing over his songs for a reinterpretation that he will also be part of feels quite natural. “[The Phoenix Foundation] deconstruct and reconstruct as we record brutally anyway.” It’s a way to also recontextualise the band’s history by playing songs that have been part of their canon in a completely different way “It’s great handing them over and seeing what (other) people have done”.

One of the special things for Luke is that one of the arrangers has created a world in which he will sing the band’s 2007 song 'Burning Wreck' accompanied solely by the orchestra. “It’s really lovely”, shares Gareth. “I’m terrified” adds Luke.

The NZSO and The Phoenix Foundation Celebrate! takes places on the 2 August at the Michael Fowler Centre in Wellington, 3 August at Auckland Town Hall, 30 August at Issac Theatre Royal in Christchurch, and 31 August at the Regent Theatre in Dunedin.