As an ex- graduate what an absolute privilege, sheer delight it truly was to celebrate the New Zealand School of Dance's 50th Anniversary Graduation Season at the St James Theatre.

In one of the most polished, memorable, brilliantly choreographed and executed performances across both the contemporary and classical realms - the dancers did not disappoint.

It was pure pleasure to watch with bated breath, the effortless, graceful, yet strong and dynamic performances, from not only dancers from the NZSD but two guest appearances from the Royal New Zealand Ballet Company.

It all harks back to a group of dedicated people who recognised the need for New Zealand to produce its own national dance school. 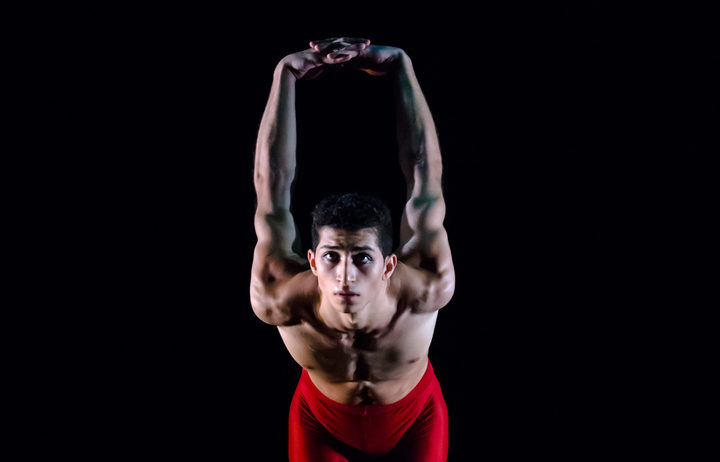 The National School of Ballet opened its doors to the first cohort of 10 students on 6 March 1967.

At the Saturday pōwhiri Garry Trinder, director said the anniversary reflects on the remarkable pioneers who laid the foundations from which we have forged an international reputation for producing world class dancers, choreographers, teachers and directors.

"Their tireless efforts produced not only visionary goals but stressed the importance of financial stability and artistic integrity and in the early days," Trinder says. "The School continues to punch above its weight because of visionary leadership and committed, passionate and dedicated staff."

The program of 11 substantial classical, contemporary and neo-classical works was interspersed by two intermissions. Those in the auidence, from tutors, former students and industry stalwarts all agreed, the level and delivery was all relative to the era at the time.

The highlight strangely enough was not Balanchine's Allegro Brillante showcasing the gifted talent of third year soloists Emma Rose Barrowclough and Jack Whiter and the corps de ballet. Performed with precision, timing is always tricky but Barowclough and Whiter's on stage relationship was gorgeously impressive.

Any professional dancer understands this work to Tchaikovsky demands such athleticism and endurance. It's like an aerobic workout - a total challenge to do well. Those who come from a strictly and mainly classical background may have been surprised but not shocked to find themselves gravitating toward the contemporary pieces. 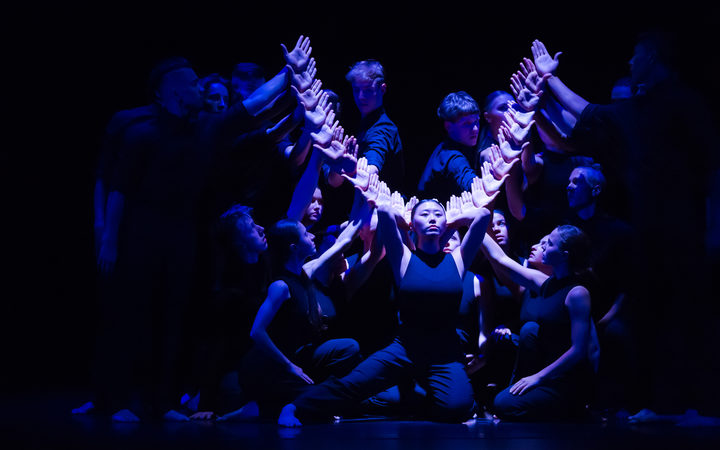 Nadine Tyson's arrangement of the Nutcracker's 'Tempo di Valse' to Pyotr Il'yich Tchaikovsky's Waltz of the Flowers was simply stunning allowing energetic students a platform to showcase their technical and artistic capabilities. The corps held it together musically with aplomb, grace and the calibre of their style and flow.

Val Caniparoli's Aria 1997 to music Handel/ Rinaldooverture was a standout male solo performed by Mali Comlekci with his svelte bare chest in a stunning deep red pair of tights.

The masked face in this neoclassical work tended to reel the audience in leaving them on the edge of their seat wanting more. Our loss, Queensland Ballet Company's gain after Comlekci has already signed along the dotted line.

Created earlier on the year by dancer with RNZB and former graduate Loughlan Prior Curious Alchemy was created to impress. A polished, techy yet sharp number with fabulous flair - entertaining from go to woe. 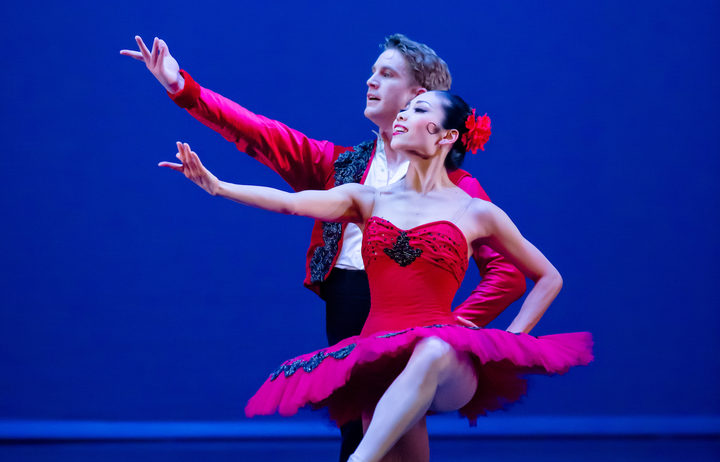 If there were such a thing as ballet Oscars Sarah Foster-Sproull's well - lit Forgotten Things originally performed in 2015 was the epitome of the night. It's no easy task to choreograph 23 contemporary students however without a shadow of a doubt this masterpiece stole the show.

RNZB's Mayu Tanigaito and Joseph Skelton's performance of the 'Wedding Pas de Deux' from Don Quixote at the close of the first Act was mind blowing. Tanigaito's fouettés and grandes pirouettes were fast, her elevation technique mostly flawless, square hips, flexibility and metatarsal arch were astonishing to observe, great balance and on point.

Considering no one rarely ever does that male solo quite like Baryshnikov, Skelton displayed extraordinary talent, a calm demeanour and airtight technique.

Dating from 1966 Kenneth MacMillan's Concerto pas de deux, transmitted an ageless air about it setting the stage for Olivia Moore and Calum Gray to put it to the test. They achieved excellence - well done. The work had two grand pianos soixante-neuf on stage. The Shostakovich magically played by the School's pianists, Craig Newsome and Phillip O'Malley. 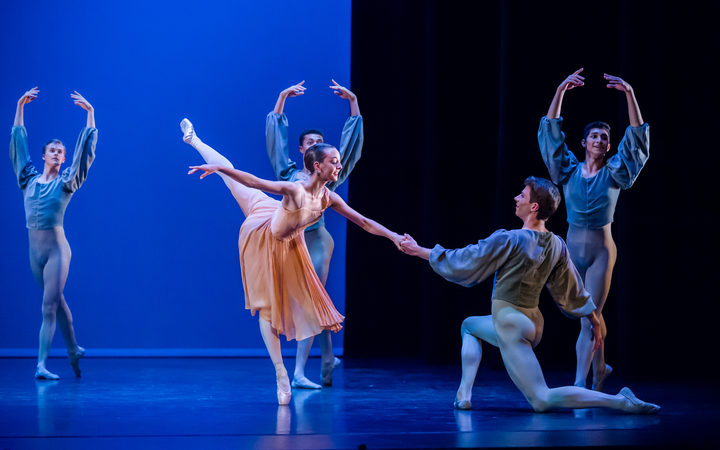 Michael Parmenter's 'The Bach' was set to a Bach, Erfreut euch, ihr Herzen Cantata performed by 16 second and third year students. The unsolidified, uplifting baroque dance was up to scratch - as most of his harmonious works are that I've been lucky enough to see over the years.

Parmenter says he has often experienced the excitement and relief - tinged usually with a little sadness - that the graduating students feel at the close of their three years of study believing the structure of Bach's chorus roughly follows the pattern of emotion that one experiences in such a venture. Original excitement with the thrill of new discoveries, anxiety and doubt brought on by insecurities and then celebration and triumph at having emerged victorious.

The night concluded with, William Forsythe's In the Middle, Somewhat Elevated, a work initially created for the Paris Opera Ballet and the second work commissioned by Rudolf Nureyev premiered at the Palais Garnier in 1987. The first cast included my favourite dancer of all time Sylvie Guillem. The Royal New Zealand Ballet first performed it as part of the Speed of Light contemporary mixed bill, in February - March 2016.

Some who gave a post mortem on this performance felt it could've been halved in length however some couldn't get enough of the brilliant provocative, combative choreography. The expertise of The RNZB dancers made them well equipped to the transitions of intricate enchaînements which either thrilled or frightened you.

You would've wanted to do a huge warm up before going on stage as the risk of injury would be high otherwise. The audience saw every limb contort and beautiful backs on all the dancers who looked like lean mean fighting machines in their green leotards with opaque black tights revealing every rippling muscle.

"A love of learning, a longing for discovery, and a commitment to excellence are the underpinnings of a great school. Every day he is struck by the intellectual passion and sense of connection that NZSD fosters in its staff, students and alumni.

"The history, the lineage of the School is evident to me every day. The passing of the baton happens constantly.

"The rich tradition continues in the studio through every step, every phrase, every variation, every muscle twitch. It's the lifeblood through which this fragile art form is fed. In Helen Winchester, Susan Simpson, Nadine Tyson, Tanemahuta Gray, Sophie Ryan, Sue Nicholls, Sacha Copland, Luke Hanna, Victoria Colombus and Turid Revfeim, they are a living heritage from which the current students are influenced. Anne Rowse and Christine Gunn unveil a wisdom that goes beyond technique and touches upon love and generosity," Gary Trinder says.

A glorious night to be remembered - here's to the next 50 years.