Wu Man is here to perform with the New Zealand String Quartet. The founding member of Yo-yo Ma’s Silkroad Ensemble plays her pipa live in the studio and discusses the fascinating evolution of her solo career which has seen her perform with Kronos Quartet and premiere works by Philip Glass, Lou Harrison, Bright Sheng and Tan Dun. 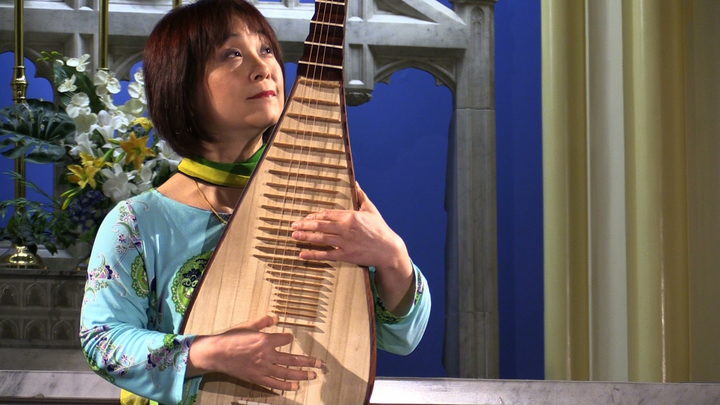 If you’ve learned Tai Chi you might have encountered the move ‘play the pipa’. This move relates to the plucking motions on the instrument.

“People always describe it as a pear-shaped, lute-like instrument”, says Wu Man. “It’s flatter than a Western guitar, with a very heavy, hard wood on the back, redwood. This material only exists in South-East Asia or China.”

The wood affects the sound quality. There are different materials but Wu Man believes the best choice is redwood. 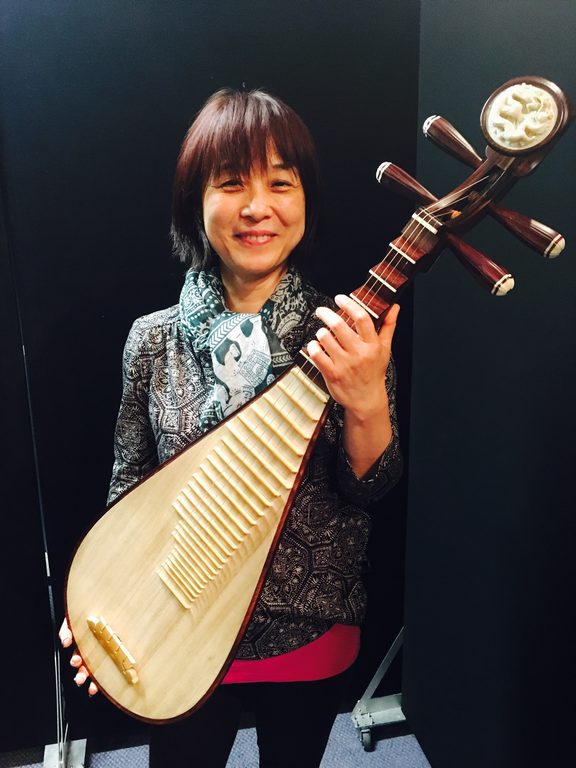 It’s heavy - heavier than you think – 12 pounds (5.4kg) and Wu Man has to carry it with her while she runs through airports, getting from one destination to the next, and by the end of a day it can feel much heavier than 12 pounds. Fortunately it fits in overhead luggage so she doesn’t have to pay for an additional seat on an plane.

When she was nine Wu Man started on a smaller plucked instrument, the Liuqin, which is a little like a mandolin and she graduated to the pipa when she was twelve-years-old.

In the 1950s players added more bamboo frets. There used to be only 10 and now there are 24 frets to accommodate a larger range.

The belly of the pipa is hollow and the wood on the top of the belly is very soft. It’s made from a sort of pine tree so the quality of the sound is very different from guitar or the Middle Eastern oud, with its sound colour that seems to implode. Wu Man makes a sound like “Mwahng” to demonstrate the resonance of those instruments but she describes the pipa sound as a “bang”, an explosion of sound. So although they are all plucked instruments they all have a different timbre.

Unlike a guitar there is no sound hole on this instrument, and the pipa only has 4 strings. The tall bamboo frets allow the performer to bend the notes more than other string instruments.

The dragon decoration on the scroll of this pipa was carved from ivory by the instrument maker. Pipa players choose what they want as a decoration. Some have flowers, Chinese characters or even a bat but Wu Man chose a dragon. 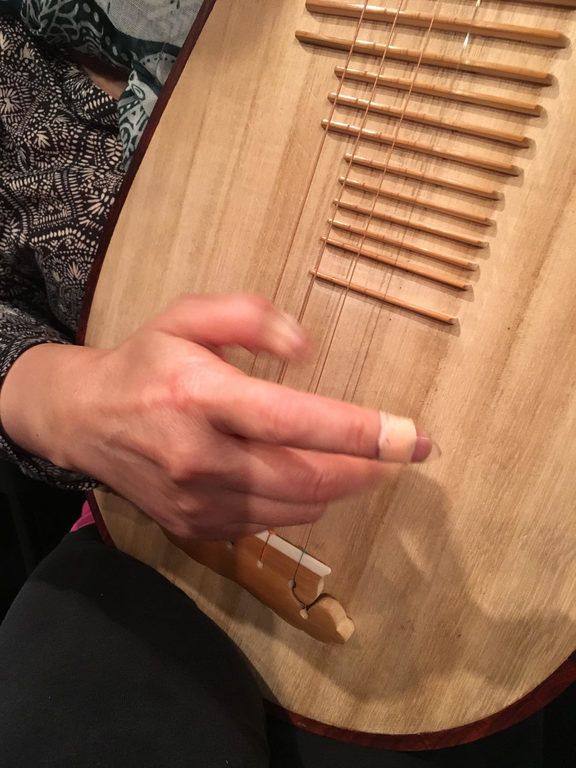 The strings are struck outwards, with a flick of the nail, which allows the player to glide smoothly through a difficult tremolo motion using all of their fingers in quick succession.

Wu Man's plucking hand is covered in plectra, positioned like “fake nails”, which are made from a strong material that and are strapped to her fingertips with medical tape.

This is a very modern way to play with metal strings. Wu Man’s teacher used her natural fingernails because earlier strings were made of nylon or gut, and in generations past the strings were made from silk, which produced a much softer, darker and drier sound.

The bent notes can be both lyrical and dramatic depending on the piece. “The personality of the instrument has quite a big range”, says Wu Man.

In the 70s and 80s when Wu Man started to play the pipa, Western instruments were not popular. Pianos were expensive and there may have only been one piano factory in the whole of China.

Traditional instruments were quite popular among her generation. Today she estimates that it may be half and half, Chinese traditional instruments and Western instruments. And today most parents want their children to learn the piano. Wu Man believes this has to do with showing off your status, or the hope of having a career like the famous Chinese pianist Lang Lang.