How do you tell a story that everyone has heard before in a new and interesting way? Do you even need to? The Royal New Zealand’s Ballet’s latest production of Romeo and Juliet answers that question with incredible and detailed costumes; fascinating and intricate sets; and powerful performances. 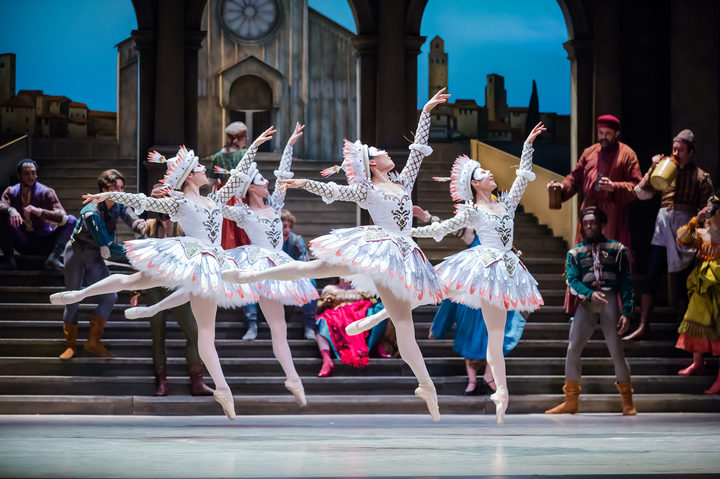 I’m not a ballet expert – it’s 30 years since I’ve had to remember what to do with my arms in first position – but I’ve always loved it. I’ll leave the expert reviewing to Dierdre Tarrant on Upbeat tomorrow. She’ll be seeing opening night, I was lucky enough to go along to the dress rehearsal, and I was enthralled.

I pretty much know Romeo and Juliet by heart, so I’m muttering “two houses, both alike in dignity…” rn. #SuchSweetSorrow

While I appreciate the technical skill and athleticism of the dancers, and I can definitely say that Joseph Skelton’s Romeo has impressive elevation and control (not to mention, the ability to toss Madeleine Graham’s Juliet around like she’s weightless), it’s always the emotion that interests me. 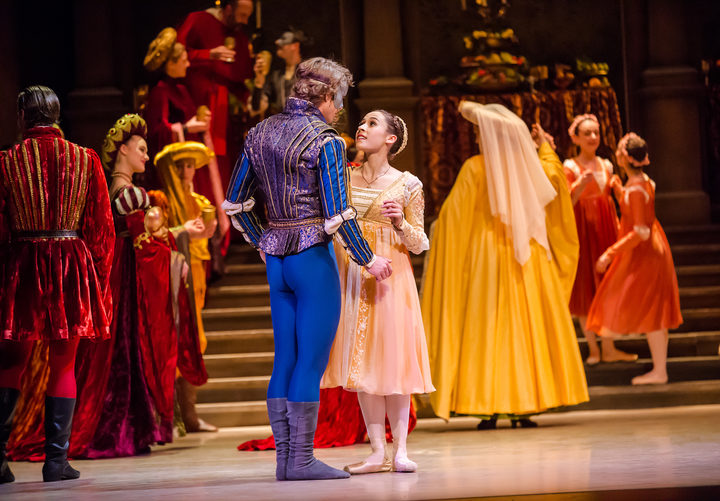 Graham’s Juliet grows from innocent and ethereal to desperate and passionate. There’s a moment, after Romeo’s banishment, where she’s surrounded by her whole family, trapped in an arranged relationship with Paris, where the staging and Francesco Ventriglia's choreography make it clear how hemmed in she is, and how she longs to escape. She’s a strong young woman – taking the lead rather than following.

It’s an interesting take on such a familiar character. Even more so is Lady Capulet, resplendent in an incredible costume – a ruby velvet gown and glittering headdress. Her complicated relationship with Juliet, and her nephew, Tybalt (“Mama Capulet definitely had a thing with Tybalt. Is that canon?” asked one audience member at the dress rehearsal) add an extra layer of complexity. Abigail Boyle’s tempestuous rage is a thing to behold. 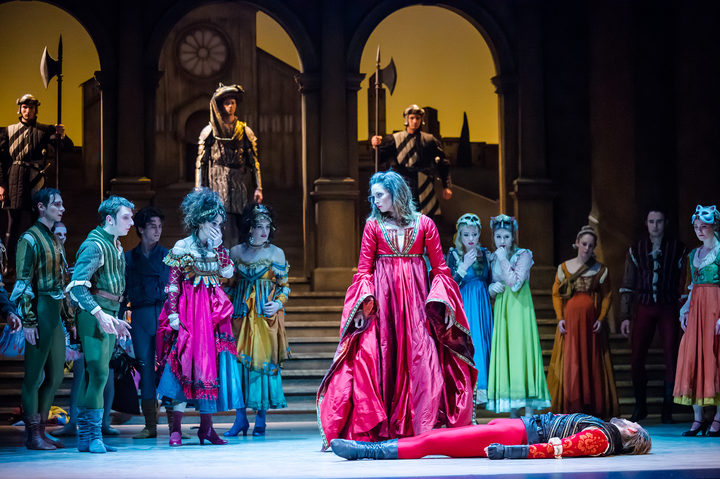 Lady Capulet’s costume stands out – and her mourning garb is similarly astonishing - but all the costumes are sumptuous and detailed. One of Juliet’s dresses was hand embroidered for ten hours – and while the detail isn’t visible from the audience, it shows. Jewel tones, gold and blush, fabrics that look rich and opulent, but are lightweight enough for the dance to shine.

This is a saucier production of Romeo and Juliet than most – one moment inspired a wolfwhistle from the audience, and it’s worth counting how many times they kiss. (Joseph Skelton’s Romeo is a perfect Veronese dreamboat, dancing a physically and emotionally demanding role.) But village harlots add colour and sass as well, especially with their colourful dresses and ribald gestures. 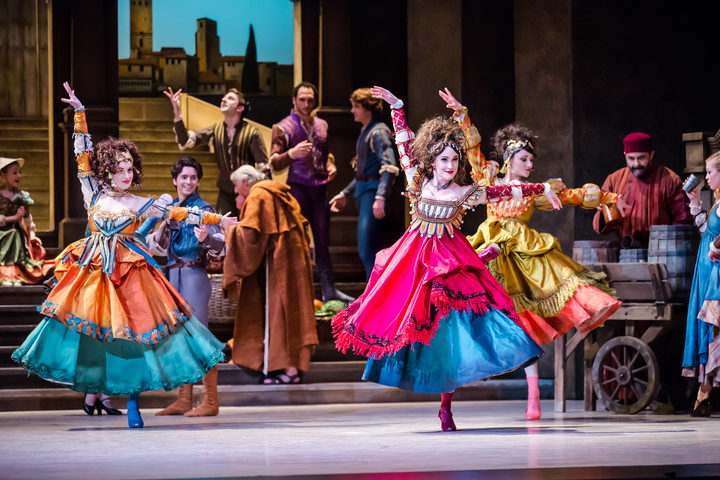 The other star here is the set, designed by James Acheson – who also designed the costumes. The set folds in on itself, revealing different spaces, including the infamous balcony. It narrows and what was a village square, with a change of lighting, becomes a tomb.

At one point, the curtain is drawn by a character, a perfect moment of using the elements of the set to tell a story. Then, the space in front of the black curtain, sparsely lit, becomes another space to be used. It’s a remarkable achievement. 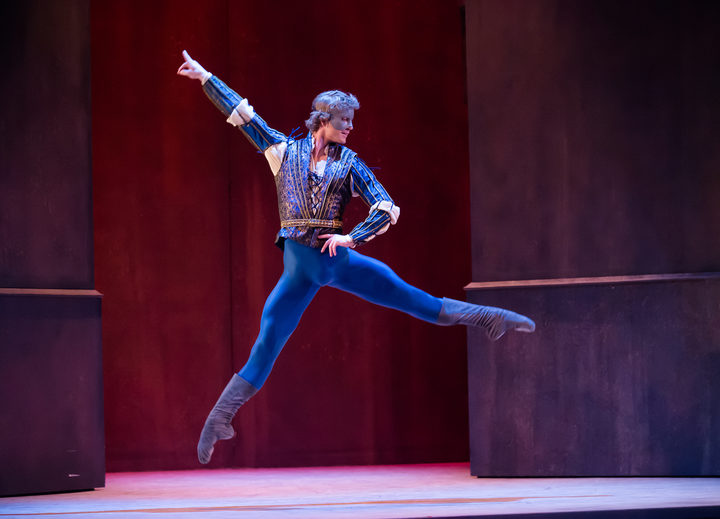 Two other scenes stand out – the fight between Tybalt and Mercutio, and the final death scene. The former is all noise, whirling dancers and slashing blades, showing off the dancers’ athleticism. The latter, on a mostly empty and darkly lit stage is so quiet, you can almost hear a pin drop – in fact, you could actually hear the poison bottle opening from back in the stall.

This is a brand new ballet – which has its world premier in Wellington tonight. It’s heavy stuff, but it is full of nimble moments and delightful surprises. 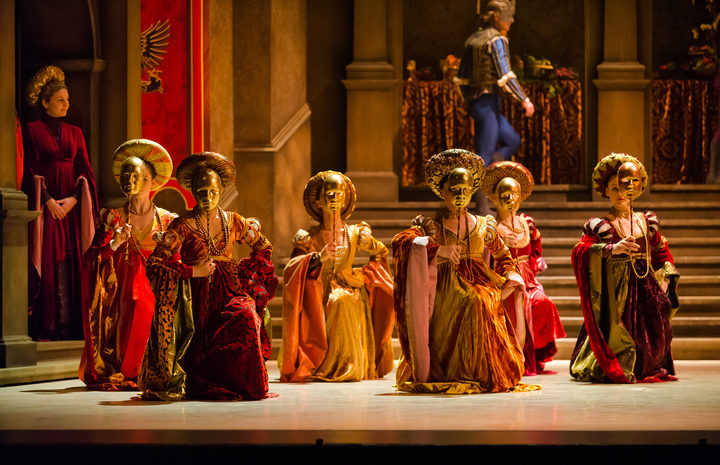