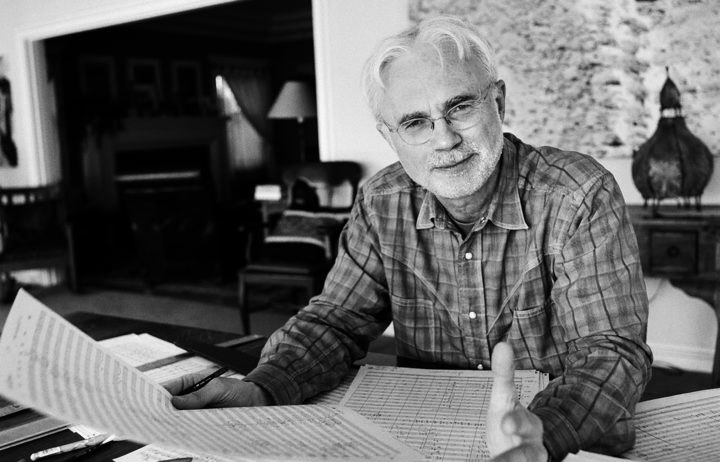 New Zealand audiences have heard a lot of John Adams’ work performed recently by the New Zealand Symphony Orchestra. But that’s no surprise given the composer goes way back with NZSO Music Director Edo de Waart.

Adams discusses the role de Waart played in establishing his career, the challenges of being a career composer, his poor opinion of Frank Zappa, writing a new opera, and today’s divided American political landscape.

So far this year the NZSO has played Adams’ Shaker Loops and Naïve and Sentimental Music which Adams describes as his take on a Bruckner symphony and a reflection of the grandeur of the Californian landscape.

In August the orchestra will perform Adams’ Short Ride in a Fast Machine.

De Waart and Adams’ friendship harks back to the 1970s at the San Francisco Symphony Orchestra. “I’m very grateful for Edo’s advocacy,” Adams says. “He was the first major conductor to identify me and to commission me and perform me. I have great fondness for him.”

In an interview with RNZ Concert recently, Edo de Waart said it takes a lot of courage to be a composer these days as so much music has already been written.

But that doesn’t put Adams off, even though the vast majority of orchestras and opera companies schedule more conservative music.

“It's an artistic technology that developed around the time of Haydn and Mozart and had a wonderful flourishing about 200 years and those [works] are really what we refer to as the classics,” he says.

“I feel myself on the tail end of a great tradition but it doesn't mean I don’t have something valuable and meaningful to contribute.”

But unlike with other art forms, it’s contemporary music that audiences struggle with. Adams compares it to the appetite for Shakespeare. “A friend was a director of the largest theatre in San Francisco and he said Shakespeare was a hard sell; hard to market,” he says.

“People really want to see a new play and I thought that’s the opposite of my life where all people seem to want to do is hear more Beethoven!” he laughs.

To try to attract new audiences, orchestras around the world programme his works with pieces composed by famous rock stars. In Europe, the programmers seem particularly drawn to teaming Adams’ work with artists like Frank Zappa.

“People [hope]… that it will lure an audience that recognises a famous rock name… and then slip them a piece of mine,” he laughs. “If the pieces were good then I wouldn’t have a problem with it. For example, Frank Zappa wrote a lot of "serious" classical contemporary music... in my mind, it’s really bad music.”

But to help develop an appreciation of contemporary classical works, Adams thinks audiences need to be open minded and be willing to face the music. “I don’t mean this as an insult to the audience, but I think the true classical music audiences are the most timid and risk-averse of all the people who encounter art,” he says.

“While they may go into an art museum and see a painting that is blurred or shocking, they can turn away… but if they are stuck in a concert hall [with] something that’s aggressive and dissonant, it’s a very disturbing thing for them.”

Adams is still excited about producing new work, with an opera opening soon in San Francisco directed by long term collaborator Peter Sellars; Girls of the Golden West looks at issues like women’s rights, immigration and racism, but it also has a humorous, witty edge. He only put the finishing bars on it last week.

“There are many parallels in this story that resonate with our lives today,” he says.

"The hectic overvalued and materialistic insanity that’s going on in the digital world and Silicon Valley, is the same kind of insanity that infected all of the people who came out of here in the 1860s to get rich.”

California is his home state and even though he’s deeply disturbed by how the country is becoming a “terrible juggernaut… becoming more and more schizophrenic”, he’s finding solace in how California is dealing with the Trump administration.

“We have a wonderfully multicultural society here. The state has a large Hispanic population and partly for that reason I made a point of learning Spanish so I could speak it and read it,” he says.