Former New Zealand Symphony Orchestra players take us down memory lane. Farquhar Wilkinson principal cello from 1955-1992, Alan Gold principal clarinet from 1961-1994, Wilma Smith concert master 1993 until 2002 and Kenneth Young, principal tuba 1976 until 2001 discuss their fondest memories, who they loved working with, who is best forgotten, and what happens when things go wrong. 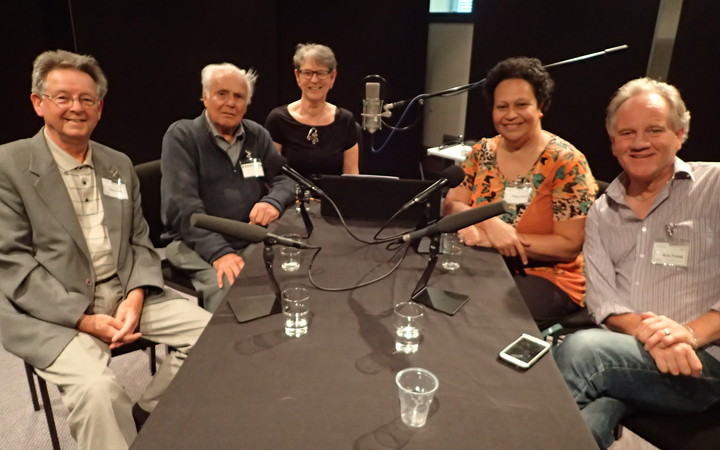 This week marks the National Orchestra's 70th birthday and as part of its celebrations many former players were in Wellington for the Monday night birthday concert.

It gave us an opportunity to get some of those long serving players into the studio to talk about their shared experiences, and they didn't need much encouragement.

The players involved have between them over a hundred years of orchestral tenure.

Alan Gold, principal clarinet from 1961 to the mid-1990s on Stravinsky conducting the New Zealand Symphony Orchestra

"It was incomparable to anything else. You can't compare playing Stravinsky's music with Stravinsky conducting - no matter how good any other conductor is.

"Those (other) conductors come and they go. They do wonderful things… but they are tomorrow's chip paper. Stravinsky is here forever.

"He was just so friendly. There are photos of him sitting down in the intervals with the orchestra all crowding around and he's chatting away. God's not supposed to speak to you like that!"

Not long after the concert at the Dunedin Town Hall, György Lehel, who was the chief conductor of the orchestra for just over one year 1988-89, returned to Hungary and died of lung cancer. Everyone was aware he was dying.

"He was a lovely man. We did the Organ Symphony of Saint-Saëns and the tears were rolling down his face. It was his favourite piece.

"People in the orchestra were almost stunned at the end of it. There was a silence before the applause. It got the whole hall. When it happens to everyone, it's a very special occasion."

Dr Decker had the reputation of being difficult at times. Wilma went head-to-head with him.

"We ended up being great mates!

"He had a particular way with female principal players of putting them through their paces. He'd test you to see what you were made of. We had it out in his room during a break in rehearsal and then we were good."

For Wilma though, the stand out was the way Dr Decker handled the big moments in his favourite repertoire like Mahler. "Very rarely since (him)... I've seen someone who masters those moments like he did. He let something happen that was magical."

Conductor Kenneth Young, Principal Tuba from 1976 to 2001 on Decker and Gareth Farr

"He (Decker) was an architect.

"We were doing Hindemith 'Symphonic Metamorphoses on Themes of Weber' and dear Gareth Farr was playing the tubular bells part.

"He was high up in the town hall, about five rostrum up, really high. And I was sitting two rostrum below with the rest of the brass.

"Decker, once again, was on his case the whole time. Louder! Louder! He wanted these bells played louder. And it got to the performance and Gareth gave one of these bells such a whack it fell off the stand and went crashing down the rostrum - bong, dong, dong, dong - it made such a noise! It just about hit me!"

Farquhar Wilkinson, Principal Cello from 1953 on when things don't go to plan

"Years and years ago, we'd just started travelling and not doing rehearsals before concerts. We were in the hall in Tuam Street, and there had been no rehearsal and we were playing 'Portsmouth Point' overture. A great piece.

"And I felt at the time that something didn't sound right about it and I couldn't figure out what it was.

"The next thing I see Neil Dickson, the bass trombone, walking down the aisle carrying his trombone. He'd put his feet up in his bed and then couldn't find the stage door for the hall. That was quite a moment!

Wilma Smith on performing at the Sydney Opera House

"Gareth Farr had written us something to play at the Sydney Olympics and James Judd was conducting.

"A Maori party was walking on at the beginning and it was a very atmospheric opening with bird noises. The conductor and party in ceremonial dress were to come through the audience and come on stage where the piece would start properly.

"All the strings were doing bird noises on stage, so that was the beginning. We were there minus the conductor, and just starting these atmospheric bird noises for ages.

"Nobody came. It was this (bird noise) in the Opera House forever!

"Then finally James Judd, looking very red in the face and extremely flustered comes in with the Maori party and makes it to the stage and the concert begins.

"And we found out later that they had been locked out of the hall! So a very zealous usher had locked the doors while the audience was in, (and) they couldn't get into the hall. James and the party were tearing around the outside of the Sydney Opera House trying to break in while the piece had already started."