Summer Pops for quartet and symphony

The New Zealand Symphony Orchestra and Maori show band Modern Māori Quartet are teaming up for a Summer Pops tour of twelve centres. The orchestra and the band will perform new arrangements in English and Te Reo of the tunes everyone knows. Original pieces will also feature, including works from seven New Zealand composers, amongt them Chris Gendall; while dramaturg Matu Ngaropo has created a dramatic framework for the music. 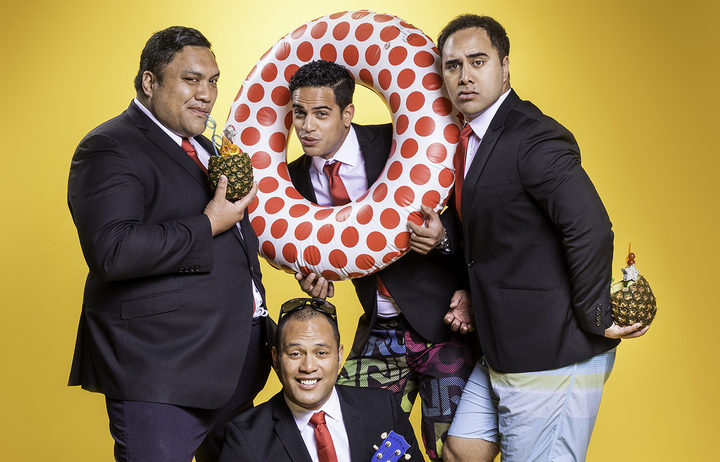 NZSO and The Modern Maori Quartet – A loving and intricate marriage

The party planning has been underway for weeks now. The drinks are in the fridge, the kai has been ordered, guitars tuned and best clothes dry cleaned.

Yes, the Modern Maori Quartet has it all in hand so when they take to the stage in Napier on Thursday with the New Zealand Symphony Orchestra in support there will be no holding back. That’s just the start of a 12 date Summer Pops tour across the country.

Music director for the show is Matu Ngaropo and the music been arranged for orchestra by Chris Gendall, along with six other New Zealand composers. Their brief was to bring something exciting that would honour the show bands of the past and give NZSO audiences something new.

For Chris Gendall it was about creating a new form not just trying to inject the quartet into the orchestra. He wanted to orchestrate music that sat “outside both worlds” and it was a unique kiwi guitar sound that caught his attention.

“The ubiquitous Maori strum is a beautiful thing and is so important to kiwi music making,” he says.

He looked at the likes of Ravel and Spanish guitar styles and applied it to the orchestration, telling the story with strings, and using woodwinds to help with articulation.

Gendall also helped orchestrate original pieces by the Quartet, including Mareikura. “It was a curious number to me. What I liked is that it sat between tikanga Maori and pop music.”

That marriage between the old and the new is what sits at the core for music director Matu Ngaropo and the Modern Maori Quartet. “It’s important we honour the whole legacy of what we are standing on the shoulders of: the culture and heritage, the music from war time. The show bands of the 50s, 60s and 70s, and our families,” Ngaropo says.

Childhood memories are evoked of his father playing the guitar at parties. “It’s all those sounds we heard as children and mixing it with Maoritanga,” he says.

The result is reflected in Mareikura, a song which celebrates women. “It’s about honouring women and what they do for us every day, our mothers, sisters and grandmothers,” Ngaropo says. “I wanted to employ chanting sounds and to hear what Chris has done with it … it starts with a really low rumble of men singing moteatea, then comes the beautiful classical wind instruments.

“It’s a lovely and intricate marriage”.