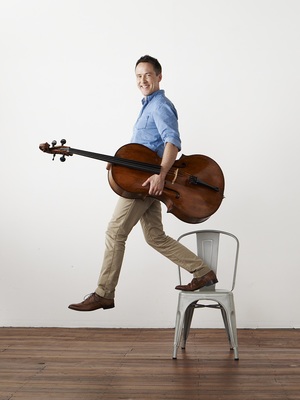 Cellist Daniel Yeadon hails from Yorkshire but now calls Australia home. He’s in New Zealand to perform a series of concerts in Wellington and Auckland with the New Zealand Baroque Orchestra: NZ Barok.

He’ll be playing Haydn’s Cello Concerto No 1 which he has recently recorded with the Australian Haydn Ensemble. It will be the first time this piece would have been played in New Zealand.

Yeadon brings with him his cello, which was crafted in the 1700s in England by William Forster II, who also crafted a cello for King George III. The instrument cost a small fortune, for which Yeadon mortgaged his house for. “I heard about this instrument for sale in Melbourne. I loved the tone straight away,” he says. “At the time it was strung in metal and tuned in modern pitch”.

He’s hoping the crowds will enjoy the performances this week, and possibly embrace what the audiences were like when the cello concerto was first performed. 18th and 19th century audiences “booed, whistled, ate, threw food, played cards, had sex, and drank during concerts”.

And while he doesn’t expect that from kiwi audiences, he is hoping they will engage with the “warm, joyous piece”. “I love to sense that the audience is engaged. It’s fine if they are silent if they are into the music,” he says. “But I’m equally happy for them to get rowdy.”

In his younger years Daniel Yeadon’s behaviour could be described as “rowdy”. He attended Oxford University to study physics, but would bunk class to play baroque music with music students, and others who had an interest in the art form, including those studying to be doctors and lawyers.

“I spent almost all of my time playing baroque music,” he says. “In 2002 I had a I had a crisis and wanted to go back into physics – nano technology in particular – but my love of music came roaring back.”

Daniel Yeadon is performing in Cello Charms with NZ Barok: