In the latest episode Upbeat producer Zoë George gets Virginia Kennard to bare all regarding life drawing classes.

What would possess someone to volunteer to be a life drawing model? If you are an artist, is it alright to talk during class? And what happens if you draw something not to scale? 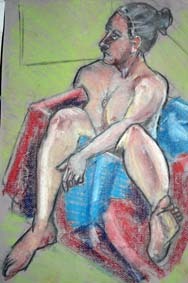 ZG: What possessed you to be a life drawing model?

VK: I’ve been modeling for seven years. It was a money thing to start with. I’m a dancer by training and I answered an ad online for a model.

It’s not about being an exhibitionist?

There’s a bit of that. A friend of mine said “it’s so great because at the end everyone tells you how great you are and all I did was lie there naked”!

What happens if I want to be a model and if I’m shy or have body image issues?

You don’t get rid of your body issues in five minutes. When you have people staring at your naked bits for two hours there’s nothing to hide. You can’t suck the rolls in, or flex your muscles; there’s no room for that. If you are shy go to a life drawing class and stare at someone for two hours. You’ll be more embarrassed because you have your clothes on!

Can the artist strip off too?

It’s not really something they do. They are there to draw you. The artists have to be comfortable too and usually they do want to take the clothes off because the models have all the heaters and it gets like a sauna (in the studio).

I’m considering being a model, but something I worry about is the fact my body isn’t perfect…

What does “perfect” even mean? The artists prefer to draw people that aren’t airbrushed model people. They like something different; they are there to learn how to draw bodies not one universal kind of body. It’s more interesting to have bodies you don’t normally see naked. For example people of colour because their culture doesn’t allow it; or people who are going through body dysmorphia, or recovering anorexics or people with weight issues; and those currently battling with their gender identity. Those things are hard to ratify within themselves. And modeling can be quite freeing for people. It’s them saying “this is what I am and now I don’t have to worry as everyone’s seen it”.

It’s not sexual is it?

As a host, how do I go about making model feel comfortable?

Welcome the model and introduce yourself. Explain who’s doing what, who’s getting sheets or cushions. Where can the model get changed? As a model you just don’t strip down. You go somewhere else take clothes off and put robe on. As a model you should ask how long will I pose for? What about breaks? What should I expect from the group? As a host be upfront. It’s also important to have clean sheets. A lot of models take their own things to lie on because you can’t guarantee the sheets have been cleaned. It’s more common than you think.

How important is hygiene?

People smell. It’s just the way it is. Sometimes I have my period, sometimes I sweat. Sometimes I shower before I go but normal hygiene is usually enough. You’re drawing from real people and they sweat, get distracted, talk and scratch things.

Is it ok for us to talk to models?

Yes I find it more relaxing when I know the artists are enjoying themselves and talking to you about what they want. I know I’m an object for them visually but at the same time they are drawing a human and it’s a sharing, social thing. You’re the star of the show you can talk about anything! I tend to rant about politics.

Is it ok to listen to music while drawing?

Yes. Some are getting lost in the moment. I don’t want to be anti-digital. People are building a practice of how they make art, and that starts in the classroom.

In some classes you’re meant to sit quietly though right?

It depends on the group of people you’re with. If you like it formal, go somewhere formal. When you move to a city and there’s a lot of life drawing going on you know that’s an active artistic community. That’s them keeping their skills up.

Can I take a photo?

No. But some artists do ask as a record for themselves. Consent is important. I’m not consenting to anything other than you drawing me. Also it’s not beneficial for an artist to draw from a photo. Because it’s flat you don’t get perspective.

Where do I look and how do I look?

To get the perspectives right, make a frame with your fingers to figure out what part of the person you want to draw, or you use your paintbrush or pencil and thumb and measure. Analyse it architecturally. Then look where you need to it you need to. If you want to stare at my eyes for two hours, or my little toe then do so. One lady would sit around behind me because she liked drawing my back.

But what you’re trying to say is… are you allowed to look at the naughty bits?! Yes. The teacher will come up and talk about different parts and they get close to your bits and it’s fine. You can tell when people get too embarrassed because there’s a little shading that goes on! The human is a beautiful piece of art work. It’s something people need to learn to draw.

Can we touch you?

No touching. This is a big rule. Do not touch your model.
Sometimes someone bumps you or moves your foot into the right place and that’s not cool. Tell your model where they need to be and how to hold their body. You have to be explicit because you can’t touch.

Is there anything else, other than touching, that is a big no?

Asking the model for their number! And talking about models’ body types…in a beauty sense is a big no. For example “you have beautiful eyes”. Talk about it in a drawing sense rather than beauty. There’s a fine line.