The Art of Etiquette - musical theatre

Art is in the eye of the beholder, but how do you go about showing your appreciation? In Upbeat's new series The Art of Etiquette, we help make art accessible for those who are unsure of what to do.

Is it okay to wear jeans to the ballet? Or boo at your favourite opera villain? Can I eat at an art gallery or go get an ice cream during an outdoor performance? When should I give a standing ovation?

We've gathered a number of experts to help walk us through the etiquette of ballet, opera, visual arts, musical theatre and beyond.

Upbeat producer Zoe George talks to musical theatre actor Matthew Pike, who is playing Che in Evita in Auckland. Matthew shines the spotlight on what makes a great and polite musical theatre audience. 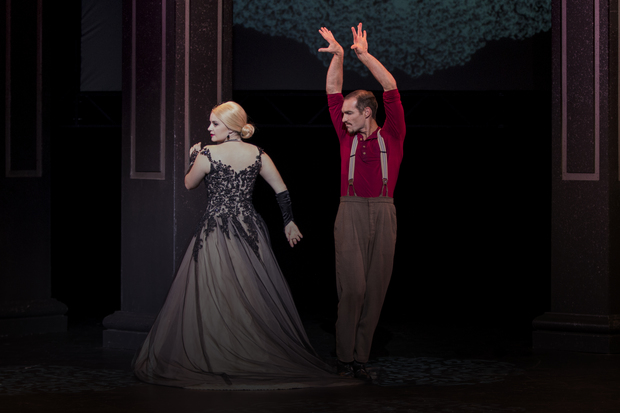 Is it okay to rustle around trying to get my favourite sweet out of the bottom of the bag?

Matthew Pike: Please don’t do it. It’s just off putting for everyone concerned, not just performers. It’s a musical and you’re trying to use your ears to absorb the art. It’s very difficult with that noise.

Should we be eating in the theatre at all?

I personally don’t see a problem [with] it, but it invites noise.

Is it okay to bring in my favourite takeaways?

For me that’s crossing a line. There’s a strong aroma and I don’t think I could deal with. It can be off-putting. The smell fills your nostrils and you’re away with the fairies thinking about food when (as a performer you’re) trying to get on with a good show.

What’s your advice with wine glasses in the theatre, especially when they fall over in a quiet moment?

It’s worse when they smash! Hold on tight.

So we’re not allowed to stash it under our seat?

I’ve been guilty of that and I’ve had a few glasses fall over.

Whenever I say 'musical theatre' I feel like I should crank out my jazz hands!

It is a very broad genre now. From doing jazz hands and the big rousing numbers in Les Miserables and bigger than Ben Hur. Now it’s pared down. There are lots of different styles now. There’s even rap with Hamilton the musical. So there’s quite a broad palate.

As an audience should we behave differently at different shows? For example Hamilton is very different from Evita, which is a rock opera?

People respond to [Evita] like an opera. Spontaneous applause every now and then happens. We had a lovely time on opening night with the children’s choir when they sang. It was a show stopper. The audience erupted into spontaneous applause - it’s greatly received. You’ve got to have some of that spontaneity. You don’t want to be staid or stuck in your ways.

I love it when the audience responds to your performance with that organic appreciation. That’s something very special. To put a stop on it is harsh. It denies performers their due desserts. It’s nice to get that from an audience it keeps things live.

It gives you a boost, doesn’t it?

There was that moment with the kids and they finished [their] song and I was just about to deliver the next line, and we were greeted with rapturous applause. I had to freeze frame my face!

As a performer do you read the crowd and adjust?

That’s the real trick, from doing a whole lot of previews with no audience then [on] opening night they respond with laughter and applause. You have to leave gaps where you didn’t think they would be. It gives the show a whole new life.

How should I dress when going to music theatre?

I personally feel that you should dress how you like. Hamilton is a rap-based musical. It’s on Broadway and people are still dressing up and there’s big queues to get in. It’s a big event. As time goes on, more rap, and maybe even heavy metal will make it into musical theatre. When that happens there will be different audiences and expectations, it may change organically.

Can I wear jeans and a t-shirt?

I don’t mind. I’d rather you were there.

What about using technology during a show?

Pet hate - please turn it off. It can be off-putting. There are [copy] rights involved. You’re not supposed to be recording.

Winter’s here so coughing can be a problem. How do we combat this?

It’s so hard! There’s always the one cougher in the tender moment. But when you get a whole lot of humans in one place it happens. If you’re listening to a lovely performance and if someone’s coughing it isn’t pleasant. But you have to get over it.

I went to a Jan Garbarek performance in Hamburg and I had a terrible cough. It was the worst gig as I spent the entire time holding in the cough.

What about talking during the performance?

If you’re talking loud it’s off putting. It’s often quite cute when we do a matinee with lots of kids asking questions, it’s almost totally forgivable [because]  they want to absorb it. But it’s common courtesy. If you have something to share, whisper. It’s a visual feast you’re taking in as well.

How old were you when you went to your first musical theatre show?

I went to see Jack and the Beanstalk at about 6 or 7. I was so scared I didn’t want to go to the second act, so we went home. It’s a good credit to the actors. Kids have more tools than we given them credit for to absorb these stories in musical theatre and theatre in general.

I love it when kids come along. They break it down and see stories at their bare bones.

I remember my daughter coming to see Miss Saigon. She was about 10 and she turned to me at the end and said 'You were just using her, Dad!” She picked me out. I was playing the engineer. That’s what’s he did - she nutshelled the entire show.  They get right to the point.

Don’t you have to be wary of what musical you take your child to as there’s a big difference between Evita and Kinky Boots or Avenue Q?

I wonder if those shows have an age restriction on them. Perhaps they should.

When I’m at a show, can I sing along?

No! In the way if you go and see a flamenco show, you’ve got two hands and can clap along, but it’s not kosher to do so. There’s often a point in a show, such as Mamma Mia! where it’s obvious that at this point in the show you can sing along. Maybe sing to yourself a little more. It depends on what your neighbours think of your voice.

If the show is not your 'cup of tea' is it okay to leave at the interval?

I don’t see a problem in that. But often in shows they change tact in the second act and it will bring you around. You’ve paid money to be there. I really do think you want to see the work in its entirety before making a judgment call.

Art is in the eye of the beholder… you don’t have to share the opinion of everyone else, do you?

We all have different likes and dislikes. I was not very enamoured with musical theatre as kid. I was a little bit upset when they’d burst into song. It’s that little funny moment where the beautiful dialogue turns into music. If it doesn’t happen in a nice organic way; I find it jarring, even still to this day.

If you can absorb that and if works for you maybe you can help someone else through and help them enjoy it. It’s important to share and get a bit appreciation among the audience.

What the worst thing that’s happened in a performance?

I was atop a spiral staircase and there was a moment to step onto the adjacent truck (a moving platform on stage). I heard it clonk into place. Little did I know they had to pull it out to get it in the right position. I stepped out expecting it to be there and plummeted to the stage. It was about 10 feet high. Just by sheer fortune I landed on my feet. A few people may have noticed. That was not in the choreography! The audience was involved with that. The spotlight, bless him; he kept it on my face. It was obvious my life was passing before my eyes!

And without fail I always check my fly before going on. There’s nothing worse than coming off a great scene and realising your fly was down.

What is your advice to those who are going to musical theatre for the first time?

Above all, walk in with no expectations. When you walk in with expectations you’ve got a benchmark and you’re setting against it. Just let everything happen in front of you if you can. And if you can look up anything to do with the storyline, that’s always really helpful.