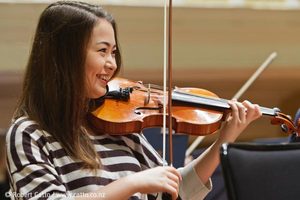 In December 2014 nine selected young New Zealand composers had their works performed and recorded by the New Zealand Symphony Orchestra in a workshop setting. Hannah Sassman talks to each composer and we hear the finished versions of their works.

For the second year running, the overall winner was Salina Fisher (pictured), and she also picked up the Orchestra’s Choice Award for her piece ‘Blushing Skies’. The composer mentor for 2014 was Victoria Kelly and the conductor Tecwyn Evans.