William Dart takes a listen to three recent releases from our own shores: new CDs from The Floral Clocks and Kingsley Spargo, and a collection of Miley Cyrus covers curated by Bryce Galloway. 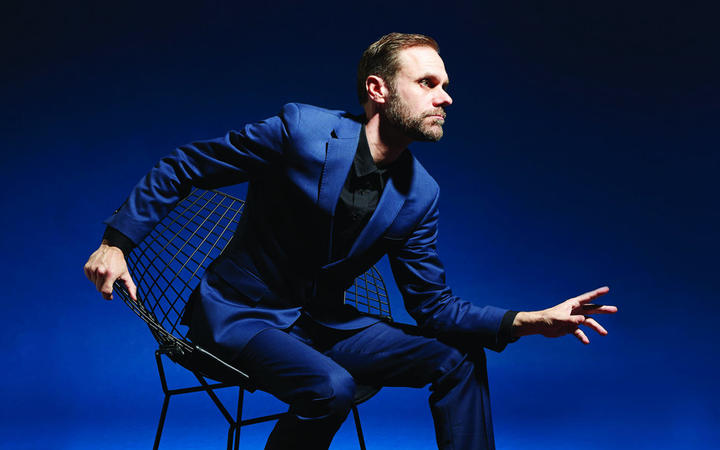 The roar of audience contentment in a major venue such as Auckland town hall is quite something. However, if you want to hear the music featured in today’s programme, you’ll need to take yourself off to more intimate, alternative spaces than town halls or stadiums.

Some of the music that these artists make might be lo-fi by Neil Finn standards, but it rates high where it matters. Especially when it comes to ingenuity, as when, four years ago, The Floral Clocks transported us into the spooky literary hinterland of their song 'Olin Hotel'.

Three months ago, The Floral Clocks released their third album, Gas Giant, handsomely produced, like their previous outings, in the form of an illustrated poetry book with CD attached.

Words-man Richard von Sturmer and music-man Gabriel White can be very proud indeed of their new progeny, with its dark, dark title track reminding us of that potentially malevolent glaring globe in the sky above us, with drum tattoo and sci-fi trimmings. 'Gas Giant', the song, is about as far as you could possibly get from your average late 60s hippie happy sunshine singalong.

Gas Giant, the album, is suffused with suns and other planetary bodies. It opens with a song to the evening star, that effortlessly transits from the planet Venus to the Goddess of Love, lying and waiting in a dark cave. All delivered with a pure pop propulsion that, if there were any justice in this music business, would have it soaring like a comet in the indie charts.

Richard von Sturmer’s terse and taut poetics offer Gabriel White just the inspiration for opening up his box of timbres. This is an album of many and various droning sonorities, all carefully and uniquely shaded, most effectively under von Sturmer’s deadpan observations from the Lone Star State in the song 'Little Armadillo'.

Percussion, too, has a big part to play, here in one of a number of songs featuring literary connections.

'Ubu' is based on the celebrated play by Alfred Jarry, the same play that gave a name to American alt-rockers, Pere Ubu.

You’ll hear a recurrent mantra of “Drum the drums for Ubu” from von Sturmer and White does just that, with a few other bangs, scratches and shakes on the side. In fact, it all takes me back to the percussive fun that Frank Zappa had behind Wild Man Fischer when Fischer went merry-go-rounding in the late 60s.

And just in case you think this song is trembling on the brink of the arcane, von Sturmer will remind you that the two vowels in the name of Jarry’s bloated, despotic Ubu are the same as the single vowel in the family name of the current president of the United States. Enough said.

Richard von Sturmer and Gabriel White work very much as a tight two-man team and so does Bryce Galloway when he pairs up with Daniel Powell as the duo Wendyhouse.

However, Galloway also works solo. He’s the man behind the zine Incredibly Hot Sex with Hideous People and the latest issue, number 70, is built around a CD tribute to American singer Miley Cyrus.

This man always manages to find choice musical collaborators when there’s deconstruction to be done and the controversial Cyrus comes with the potential to create havoc and hilarity.

Going back over Galloway’s past tribute albums, to John Lennon, Madonna and The Eagles, he’s never afraid to slip some lemon drop into what might have been too sweet for comfortable digestion. Who could forget the strange and moving desolation of the closing track from the Eagles collection, when Lonely Teenager AKA Karen Dale sings along with Glenn Frey on the song 'Desperado'.

Bryce Galloway is quite the curator on My Life with Miley Cyrus. Whereas the Eagles were introduced with a single paragraph, Cyrus is allotted a whole page starting with a crisp statement of intent. Galloway admits to liking the woman, if not her songs, and the tribute is a marking of the fact our Miley is almost culturally inevitable. She’s everywhere, from YouTube and the supermarket to Ru Paul’s Drag Race and the karaoke machine.

(Editor's note: The songs on My Life with Miley Cyrus are not available to listen to online … you'll have to listen to William's programme or buy the zine.)

And what could be a better testament of pure devotion than Wellington singer Olivia Webb ushering us into a veritable Chapel of St Miley on her opening track, 'Cultural Abbesses and Abysses'.

Bryce Galloway, taking part under his stage name of Mr Pudding, states very clearly where he stands with the lady being tributed and despite mocking its silly lyrics and such, he professes a soft spot for her 'Twinkle Song'. It’s a number that you can catch on line, with Cyrus performing for Saturday Night Live, accompanying herself on a grand piano, with both singer and instrument rather extravagantly dressed. Cyrus leaves no phrase untwisted for unleashing throat-choking emotions. Whereas Galloway goes for the jollity factor.

There’s a lot of synthy backings on Bryce Galloway’s Miley Cyrus tribute but the switch is firmly turned off when Dick Whyte takes on one of the American singer’s best known hits.

The song 'Wrecking Ball' has something moderately serious to say about roles in relationships, but for me it was always clouded by Cyrus’s sensationalistic video which has her swinging naked from a wrecking ball.

Dick Whyte, I presume, keeps his kit on and wrecking balls are nowhere to be seen, in this guy-and-guitar version of the song, touching in its starkness.

Sean Kerr is best known as an intermedia artist, on the staff at Auckland University’s Elam School of Fine Arts. Visit his website and you’ll find some of the fantastical sonic/slash/sculptural artworks that he’s exhibited on both sides of the Tasman.

Kerr’s contribution to this Miley Cyrus tribute is her 2010 hit 'Who Owns My Heart', described by one critic at the time as a pulsy, club-ready jam deserving of single status. Kerr keeps it at a high pulse level, with hypnotic beats that occasionally threaten to flail.

The key to Kerr’s deconstruction though comes in his vocals, dispassionately recited with the same cool deadpan that American composer John Cage was given to use. Making it one of the most successful deconstructions of the album.

Over the last few weeks I’ve run the risk of being rather Miley Cyrused out, particularly by videos in which the American does far too much writhing on wrecking balls and beds.

The clip for her song 'Adore You' is a case in point and the version that you’ll hear on this tribute CD offers a welcome corrective. The vocalist, Christchurch’s Gemma Symes, sings with an autotune twist that turns it into a sleek electro-yodel, while producer Junus Orca, punctuates it with what sound like unfortunate bugs meeting their fate in an electric fly swatter.

Aucklander Kingsley Melhuish is a name I associate with music on the experimental side. I’ve enjoyed him on a number of occasions presenting and playing various brass instruments alongside Pasifika sound-makers and taonga puoro.

Some of these were brought out for his take on Eve de Castro-Robinson’s 'ConunDRUMS' on her recent album, The Gristle of Knuckles. Melhuish’s drumming partner on this occasion was Ron Samsom.

Now there’s a new Kingsley Melhuish in town, recording under the name of Kingsley Spargo.

He’s dressed in style for the occasion, elegantly captured on the cover of his new album by photographer Ralph A. Brown.

Chasing Spirits is a bit like a trip to an all-star cocktail lounge. Not only does Melhuish play guitar, brass and taonga puoro, he’s a smooth vocalist.

Alongside him, that all-star band includes Neil Watson (who takes us to Nashville with his pedal steel), Alan Brown, Chris Orange, Sam Giles, Ron Samsom and a guest turn by Harry Lyon.

In a collection of seven thoughtful songs, 'Fishing for love' stands out. With lyrics by Kim Meredith, it shows just how potent its singular instrumental mix can be. And I’ve yet to hear the chord template of the Stones’ 'You can’t always get what you want' more persuasively echoed.

I'm presuming that it will be on the bill when the band performs live on the last Saturday of November, not in a town hall or a stadium, but in the folk-friendly venue of Kumeu Live.