William Dart listens to Bruce Springsteen … on movie soundtrack, from the Broadway stage, and in a new studio album, Western Stars. 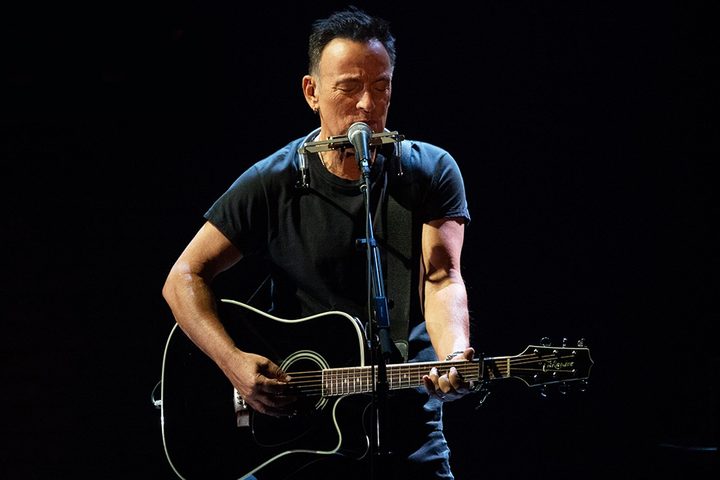 The soundtrack of the film Blinded by the Light that appears on CD is not quite what you get in the movie house, where you won’t find A.B. Rahman’s treacly guitar underscoring this scene-setting cri de coeur from the film’s young hero.

In the cinema, while actor Viveik Kalra protests his current plight, you’ll hear the rumbling techno warm-up as The Pet Shop Boys prepare to tell us that ‘It’s a Sin’.

The sin is, in this case, that this young Pakistani man is trapped in Thatcherite Luton.

Like all idealistic romantic heroes, he wants to break free, particularly from the stranglehold of a patriarchal family and to make his mark as a writer.

The connection for today’s programme is that the hero falls irrevocably under the spell of Bruce Springsteen — hence the title of the movie.

It’s a life-changing admiration that’s initiated and fostered by his turbaned friend Roops.

When our hero Javed is a total convert, with his bedroom walls plastered with images of the American singer, it’s a cause for celebration. Although, once more, on the screen, this impassioned outpouring is not laced with a soft piano ramble around a Springsteen ballad, in this case 'The River'.

Blinded by the Light packs a powerful punch, its message geared very much towards the issue of integrating migrants into our western societies.

For me, hardened all those decades ago by movies like To Sir with Love, there are just a few too many “aw shucks” moments, and attacks of the warm fuzzies that make you realise that the emotional manipulation meter is hitting the red perhaps too much — even if it’s being done in an admirable cause.

However, in the film’s defence, it is based on a true story: that of Pakistani journalist Sarfraz Manzoor, who laid out his own teenage adulation of The Boss in his 2007 memoir, Greetings from Bury Park: Race, Religion and Rock ‘n’ Roll. And the film’s director Gurinder Chadha has done a marvelous job, weaving in crisp cameos, and staging white power march that seems frighteningly 2019.

There’s a really beautiful scene in which, while Springsteen sings ‘Dancing in the Dark’, the song’s lyrics circle around the young Javed’s head, like rings around Saturn.

Another catches the cultural clash through the actual music. Javed’s sister takes him to a Pakistani disco but, when he puts on his headphones, he is magically transported to Springsteen Land.

Finally, this CD of Blinded by the Light includes just one track that will make it a must-buy for any Springsteen fanatic – an otherwise unavailable song. In this case it’s an unreleased number written for, of all things, Harry Potter and The Philosopher’s Stone.

Moving on to the man himself, the Springsteen base will be rejoicing at the arrival of a new studio album, Western Stars.

It’s his first for five years, since 2014’s High Hopes. Not that there hasn’t been a deluge of concert albums being made available of late. This year alone, from the singer’s website, you can purchase a dozen of them, ranging from a 1998 show in New York’s Madison Square Garden to one in St Pete Times Forum in Tampa Florida twenty years later.

You can also purchase your live tracks curated thematically, in albums titled Songs of Friendship, Songs of Hope and Songs of Love.

This man is organized.

But the truth is that back in 2014, at the grand old age of 65, Springsteen was taking stock, focused on writing an autobiography, which would appear two years down the track, titled after one of his best-known songs, Born to Run.

It’s highly recommended, and you could get seriously caught up in it, from its opening description of a ten-year-old Springsteen who knew every crack, bone and crevice in Randolph Street’s crumbling sidewalk … going on to construct fantasies of Hannibal and his GI and Western heroes adventuring in his new universe.

Apart from the stirring insight into the singer’s family background and the placing of his music in a personal context, this man can wield words – from hailing The Apollo Theatre as the holy house of soul to sketching in saxophonist Clarence Clemons as a man with no postmodern bullshit about him – a true Bukowski character come to ass-on-a-bar-stool life.

He analyses his craft, describing a lot of what his E-Street band does as hand-me-down schtick, transformed by will, power and intense communication with the audience into something transcendent.

As for his own voice, he admits to not having much of a one. He may have a bar-man’s power, range and durability, but he doesn’t have a lot of tonal beauty of finesse.

So what, anyone would say, he’s singing Springsteen, not Schumann.

In these media-savvy times of ours, we can read, and we can listen to the autobiography on a Simon and Schuster audio book, read by The Boss himself.

And the extremely alert Springsteen Marketing Machine brought out an accompanying album, Chapter and Verse, with the dangling carrot of five previously unreleased songs … no Harry Potter duds this time.

It didn’t take long for Springsteen to develop his new life story into a Broadway show that ran for eight months from November 2017, earning him a Tony Award the following year.

At the end of 2018, the show turned up as a double disc CD for those of us who couldn’t make it to New York’s Walter Kerr Theatre.

It’s a fascinating, albeit probably one-listen, document. He ranges away through his life and various philosophies but for me one of the most moving moments comes when he sketches in the background for the song ‘Brilliant Disguises’ from his 1987 album, Tunnel of Love.

Unlike the full band treatment it got on Tunnel of Love, this time around there’s just Springsteen and his guitar, alongside his wife Patty Scialfa.

That’s quite a performance, unadorned to the point of being rough, especially with Scialfa’s fragile, exposed vocals. Which is the point. Vulnerability leaps from the speakers and, when you realise the song was written about Springsteen’s first wife, it’s difficult not to feel relief.

Springsteen talks and sings a lot about his family background, and his mother is remembered fondly and vividly when he introduces his ballad, ‘The Wish’, a 1987 song that appeared on disc a decade later.

It’s received regular concert outings over the years, even fondly introduced as his Mother’s Day song, but be prepared for a revelation in his introduction that brings us hurtling back to reality.

Musically, the song itself finds Springsteen putting down his guitar and sitting at the piano, an appropriately sonorous move.

When Bruce Springsteen’s new studio album appeared two months ago, the singer had prepared us for maybe something of a departure, a search for the good old days of Southern California pop. Names like Glen Campbell, Jimmy Webb and Burt Bacharach were bandied about.

And you can hear them in a track like ‘The Wayfarer’, even if the opening cello and guitar riffing can’t help reminding me of Lou Reed’s ‘Street Hassle’.

There are some extremely unexpected touches in that song — including David Sancious’s piano thirds falling in straight out of David Bowie’s ‘Breaking glass’.

But despite the move west in these songs, Springsteen doesn’t seem a particularly happy man. Although if you follow his moving accounts of coping with depression in his autobiography, this won’t be a surprise.

The western wayfarer caught in that last track, looks positively gloom-bound in the various shots throughout the CD booklet. Especially when he’s trapped in one of those vehicles that once gave him such songwriting pleasure.

Even a number like ‘Hello Sunshine’, which could have been written as a follow-up for Glen Campbell after his success with ‘Gentle on My Mind’, doesn’t convince us that California is really going to lift his spirits.

The elegiac pedal steel of Marc Muller is just one of the multifarious colours that give Western Stars its life and character. And it’s a long way from the frisky banjo of ‘Sleepy Joe’s Café’ or the arty cello and guitar conversations of ‘Chasin’ Wild Horses’.

I like the way in which the song ‘Tuscon Train’ opens with clatter or percussive train-tracking but is almost immediately subsumed into one of the album’s lush pop arrangements.

One of my delights has been following the guest turns of Jon Brion, adding celeste to the album’s closing track, ‘Moonlight Motel’.

This exquisitely written song is so much more than just a slice of nostalgic pining, occasioned by a deserted motel on a forgotten road – even if its imagery has the detail of the deeply personal.

Now, the cracks in the concrete on the sidewalks of Randolph Street have dandelions growing up through them … while the motel itself lies boarded up and gone like an old summer song.