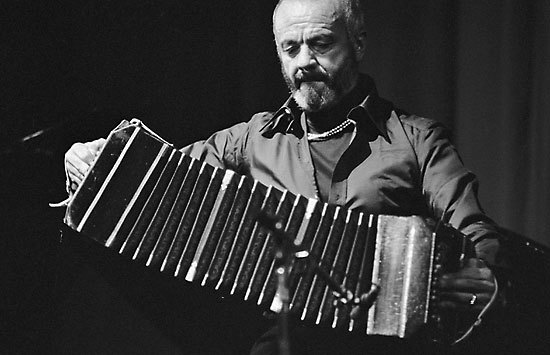 Astor Piazzolla (1921-1992) was born in Mar del Plata, Argentina, the only son of Italian immigrants. The family moved to Greenwich Village in New York City in 1925. When young Astor was eight years old, his father brought home a bandoneón that he'd found in a pawn shop. Astor began music lessons with Hungarian pianist (and former pupil of Rachmaninov) Bela Wilda, who instilled in him a deep appreciation for the music of Bach.

In 1934, he met the tango celebrity Carlos Gardel - Piazzolla had grown up listening to his records. Gardel invited Piazzolla to join him on tour as bandoneón player, but Piazzolla's father decided that he was too young to go. His father's caution turned out to be for the best, as in 1935 Gardel and his entire band and company were killed in a plane crash.

After studying composition with Nadia Boulanger in Paris, Astor Piazzolla returned to Argentina and formed his own octet, creating a tango sound that sounded more like chamber music without a singer, and developing new techniques with the bandoneón and a stye that became known as nuevo tango.

'Oblivion' is one of his best known compositions.

Recorded in Nelson Centre for Musical Arts by RNZ