Johann Sebastian Bach's 'St. John Passion' for only three musicians? Coming from the city where Bach lived and worked, Leipzig, Germany, the audacious experiment in compliance with social distancing gave musical sustenance to hundreds of thousands of people during the livestream on Good Friday 2020.

The tiny setting – just three musicians – was in full accordance with social distancing and hygiene regulations in April, when new infections in Germany were spiking. The performance began at three o'clock in the afternoon, the time, it is said, when Jesus died. There was no live audience, but the livestream attracted half a million viewers. They could sing along with the chorales at their computers at home, the scores having been made available for download. Before the performance on Good Friday, five choirs were invited to join in the project and send in recordings. These were done strictly in accordance with social distancing rules, each chorister recording him or herself at home and the results later mixed. The virtual choirs are located Malaysia, Switzerland, Canada and Leipzig. An incredible technical achievement. All held together by the Icelandic tenor Benedikt Kristjánsson, who also did the arrangement, set the tempo for the remote recordings and to top it off, sings all the major roles, the evangelist, Jesus, Pontius Pilate and Peter. The vocal achievement alone is nearly unimaginable. Benedikt Kristjánsson is accompanied by Elina Albach at the harpsichord and organ and Philipp Lamprecht with an array of percussion instruments – having participated in the adaptation, the two of them actually fill in for a whole orchestra. 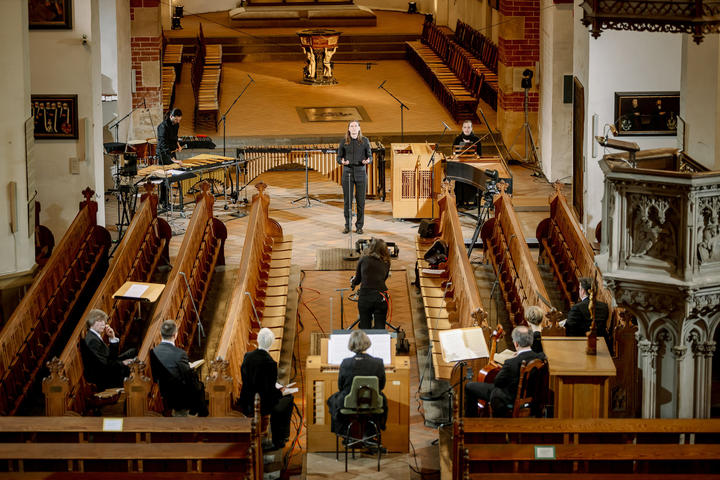