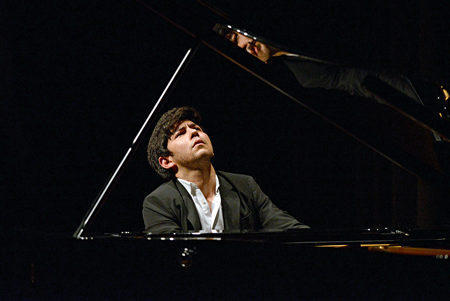 LIGETI’s Concert Românesc was first recorded in the year 2000 despite being composed 49 years before that. It had fallen prey to the restrictions of the Stalinist state. He'd written it for an army orchestra but of course there was an approval process to be undertaken, presumably to spare the military musicians any possible musical corruption.

Ligeti recalled about the period and the events surrounding the work:

“When I was twenty-six, I learned how to transcribe folk songs from wax cylinders. Many of these melodies stuck in my memory and led in 1951 to the composition of my Romanian Concerto. Under Stalin’s dictatorship, even folk music was allowed only in a 'politically correct' form. . . . The peculiar way in which village bands harmonized their music was regarded as incorrect. This was reason enough for the apparatchiks responsible for the arts to ban the entire piece.”

It's easy to forget that SHOSTAKOVICH, like so many great composers, was a gifted performing musician himself. In the Russian's case, an outstanding pianist who turned out a fair bit of music for his instrument: two sonatas, two large collections of solo pieces, two piano trios, a piano quintet, various smaller works and two concertos.

Around the time of writing the First Piano Concerto, he mentioned to a friend his temptation to return to piano performance and leave composition. The huge success of the concerto must have played some part in dissuading him, although you wonder if he might've had a slightly easier road had he done so, considering the grief that he was to get from Stalin.

It was his first concerto for any instrument and he said "this was my first attempt at filling an important gap in Soviet instrumental music, which lacks full-scale concerto-type works."

He gave no clue as to the meaning of the work, despite being asked, but wrote, in a statement of implacable banality that a modern sportsman would admire:

“I am a Soviet composer. Our age, as I perceive it, is heroic, spirited and joyful. This is what I wanted to convey in my concerto. It is for the audience, and possibly the music critics, to judge whether or not I succeeded.”

The title-page inscription of Concerto for Piano, Trumpet and Strings contains a small history of the work's development. Shostakovich explained to a student that he began writing with a trumpet concerto in mind but as things developed a piano part emerged from his imagination and gradually displaced the trumpet as the lead soloist although it remains a challenging and important support voice in the work.

The piano soloist is Behzod Abduraimov, who in an interview from a few years back revealed he almost didn't become a pianist. At age 6 he failed his very first piano examination, getting stuck in the middle of Schumann’s The Wild Horseman several times before his teacher finally told him to stop. “After that my teacher said I would never be able to play a piece on piano from beginning to end without making mistakes, ever. She said, ‘Quit music.’”

Maybe that was just some cunning reverse psychology, because he seems to be doing ok.

When listening now to a work that's a pillar of the orchestral repertoire, it's hard to imagine the shock of the new. Yet when BEETHOVEN unleashed his 3rd Symphony in its public premiere on April the 7th, 1805 following two private airings for patrons, it was baffling for many.

One critic admitted the work has “very daring ideas... very powerfully carried out” but also noted the “inordinate length and extreme difficulty of execution.” They continued: “There is no lack of striking and beautiful passages in which the force and talent of the author are obvious; but on the other hand the work seems often to lose itself in utter confusion. … The Symphony would gain immensely if Beethoven would decide to shorten it and introduce into the whole more light, clarity and unity... There were very few people who liked the symphony.”

Of course the symphony has embedded in its mythology the tale of its dedication – initially to Napoleon Bonaparte. According to a student, on Napoleon's declaring himself Emperor, Beethoven tore the title-page and let fly, crying “He will trample all the Rights of Man and only indulge his ambition … and become a tyrant.”

This version of events conveniently ignores Beethoven's only too-human motivations.  Although Beethoven had long intended to name the symphony after Bonaparte, he quickly dropped that plan when he learned that Prince Lobkovitz would pay him handsomely for the same honour. Later, after he had ripped up the title page, Beethoven temporarily recanted when he realized that a Bonaparte symphony would be just the thing for his upcoming trip to Paris.