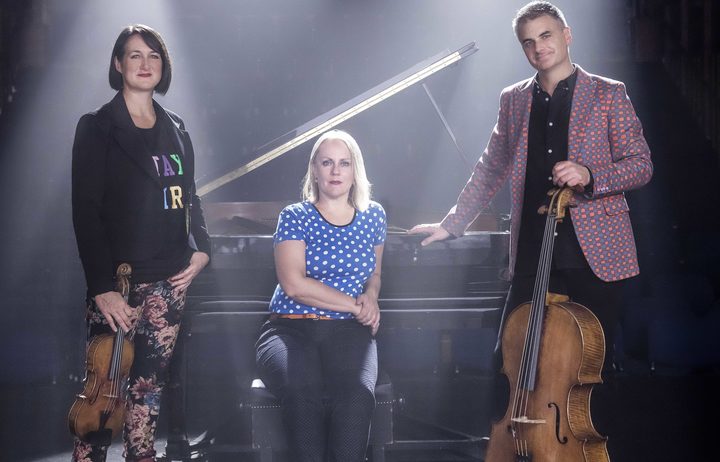 A concert in NZTrio's Loft Series at Q Theatre in Auckland.

They've called it 'Glow'. This links it to the Chinese harvest festival at the full moon midway through the northern hemisphere autumn. Or our spring. This concert takes place in late September 2016.

There are two works with Chinese connections – works by Zhou Long and Gao Ping. The one by Gao features the guzheng, a Chinese zither, which will be played by NZTrio's special guest Xia Jing.

Xia Jiang is one of the most accomplished young guzheng players in the world. She's based at the China Conservatory of Music in Beijing and as well as her work in traditional Chinese music, she's also performed with the Vienna Philharmonic and the Beijing Symphony Orchestras.

In between those two works, and connecting to the Glow theme in a different way, is a new work by Gareth Farr called Forbidden Colours.

The programme ends with the sorrowful, but in its own way glowing, Elegiac Trio No 2 by Rachmaninov, written in dedication to Tchaikovsky on his death.

"Spirit of Chimes was inspired by the sounds of chime-stones, bone-whistle, and chime-bells from ancient China. Although pre-Tang dynasty music has disappeared, I can still imagine the real sound of ancient instruments. I translated my impression of this sound into a piano trio in the hope that my music can give new life to ancient chimes."

'Forbidden colour' is a term from the science of colour referring to theoretical colours that cannot be perceived by the limitations of our human eyes – red-green or blue-yellow perhaps? The idea of it is somewhat mind-bending. In his programme note, Gareth Farr writes:

"[Forbidden Colours] establishes itself as a blurry, impressionistic texture – but soon, things start popping into focus, and then sliding away again out of view. I've tried to create the musical equivalent of when you have to strain your eyes to make something out – to even ascertain if you're looking at anything at all, or if it's just a figment of your retinas."

In Mandarin, Feng means wind and Zheng refers to the Chinese zither, also known as guzheng. Taken together, the words feng zheng mean 'kite' in Chinese.

Gao Ping explains in the programme note to his work Feng Zheng that the Chinese invented the kite and, in ancient times, a bamboo tube was installed at the tail and it would make a zheng-like sound… hence Wind Zheng.

The piece is dedicated to the late Jack Body.

Rachmaninov started writing his Trio élégiaque No 2 the same evening that his friend and mentor Tchaikovsky died in 1893. He dedicated it 'to the memory of a great artist'.