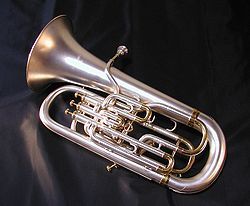 The RIGA Professional Symphonic Band is the organiser of an annual Spring Festival WINDSTREAM and the International Composers' Competition WINDSTREAM. The orchestra was founded in 1972. The performances of the RIGA Professional Symphonic Band were acknowledged by a nomination for the Latvian Great Music Award 2010 as the best musical collective of the year in Latvia as well as a nomination for the Annual Culture Award of Newspaper “Diena” for the 2011/2012 Season Opening Concert.

In 2007 the RIGA Professional Symphonic Band released its first album titled Merry Christmas! that was nominated for the Annual Latvian Music Recording Award 2007 in the category of the best instrumental, film or theatre music album. In 2008 the album Windstream was released in collaboration with the brothers Petrauskis – saxophonist Oskars and pianist Raimonds. Their latest album was released in 2011 under the title Riga. Tannenbaum. Christmas Tree with participation of conductor Mārtiņš Ozoliņš and soloists Kristīne Gailīte, Ingus Pētersons and Daumants Kalniņš. (Source: classicalnext.com)