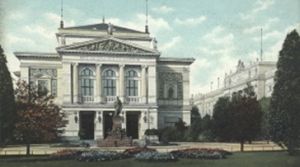 Bruckner’s Seventh Symphony was also premiered at the Leipzig Gewandhaus in 1884. An additional connection lies in the fact that the Auckland’s Town Hall, where this concert is performed, was modelled on (though is not a copy of) the second, 1885 Leipzig Gewandhaus, which was destroyed in World War II.
Text: APO website

BRUCKNER: Symphony No 7 in E (RNZ)