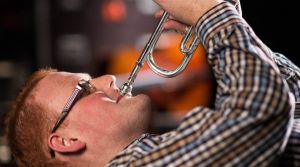 The Christchurch Symphony Orchestra has enjoyed a close association over many years, with New Zealand composer, conductor and brass master, Kenneth Young. So, it was with great delight that in September 2014 the Orchestra gave the world premiere of his Symphony No 3. Composed especially for the CSO and their multi-award winning neighbours, Woolston Brass, the music combines the forces of two of Christchurch's most iconic musical organisations.

Ken Young’s familiar with brass and orchestral music – he played tuba in the New Zealand Symphony Orchestra after studying composition at Canterbury and Auckland Universities, and today he conducts across New Zealand and Australia. (CSO)

Tonight’s concert begins with the chilling brass of Sibelius’s Finlandia, then later the CSO are joined by Australian John Foster, described as “the world’s greatest baroque trumpet player…” for a concerto by Haydn.