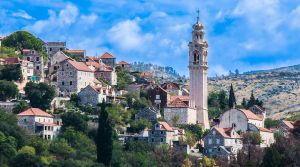 “There was a sense of the music of the country as distinct from that of the town. Folk music was already seen as the authentic expression of a way of life now past or about to disappear particularly in a community uninfluenced by art music"

Tonight’s concert is of folk music-inspired repertoire by Enescu, Berio, Bartok and Falla. Composers of classical music have often looked to folk music for a lead. Some use folk themes to give local colour to their work while others, like Bartok lift and rework whole phrases.

George Enescu’s much-loved Romanian Rhapsody No.1 is based on the folk music he grew up with, while Luciano Berio looked further afield than his homeland for his Folk Songs of 1964, the era of Woody Guthrie, Pete Seeger and Joan Baez. Berio’s songs emerged from France, Armenia, Azerbaijan and the USA.

Béla Bartók travelled the country, recording hours of Hungarian folk music with a phonograph; some of which he transformed into the Dance Suite and Manuel de Falla’s ballet The Three-Cornered Hat is set in Andalusian village life.

ENESCU: Romanian Rhapsody No 1 in A; BERIO: Folk Songs