Song of the Nightingale 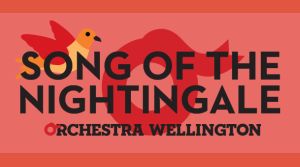 Radio New Zealand Concert’s Upbeat reviewer Rachel Hyde couldn’t speak more highly of this concert last year from Orchestra Wellington, though the Avian theme did escape her. Clearly, music speaks louder than words. After all, Haydn’s Symphony No 83 does get its nickname the “Hen” from just one or two poultry moments in the first movement. Taken as a whole, she said the symphony is a beautiful piece with “depth and passion.” The orchestra played it with “real commitment and conviction,” particularly the string section.

As for the guest soloist Jian Liu, he was “all over the notes” in Ravel’s virtuosic Piano Concerto in G. But more importantly, he communicated the lyricism of the music with “beautiful lines.” The fusion of styles we find in Ravel’s masterpiece were also handled brilliantly while still conveying that essential ”French sound,” with its simplicity and transparency.

The second half of the concert “just got more exciting,” beginning with Stravinsky’s Song of the Nightingale. This Hans Christian Andersen fairytale may be best known to Concert listeners through Jenny McLeod’s delightful New Zealand incarnation narrated by Helen Medlyn. Here we have Stravinsky’s extraordinary twenty minute tone poem with vivid painting from the great ballet composer, including a bustling Chinese street scene and free, seemingly improvised writing for the nightingale.

To end, Rimsky- Korsakov’s The Golden Cockerel which shares magical elements with the Stravinsky, and reveals the Russian flair for satire.

HAYDN: Symphony No 83 in G minor, The Hen; RAVEL: Piano Concerto in G; STRAVINSKY: Song of the Nightingale; RIMSKY-KORSAKOV: The Golden Cockerel, Suite.