The Chamber Music Contest is a national institution that has helped encourage young musicians on to successful careers in music. Many of the country's leading performers - including Michael Houstoun and several members of the New Zealand Symphony Orchestra - took part in this competition in the days when it was known as the Westpac School Music Contest. This year the New Zealand Community Trust Chamber Music Contest celebrates its 45th anniversary, and is the longest-running youth music competition in New Zealand.

Regional contests were held in 15 districts in June this year, and from the 513 ensembles that took part, 12 semi-finalists were selected, with six groups from Auckland, four from Christchurch, and one each from Hamilton and Dunedin. Six of these groups made it to the final night, and performed in the Wellington Town Hall. Radio New Zealand Concert was there, along with a film crew, to cover the event.

The recordings on this page are from this final night of the competition.

Below: This year's overall winners - The Genzmer Trio. 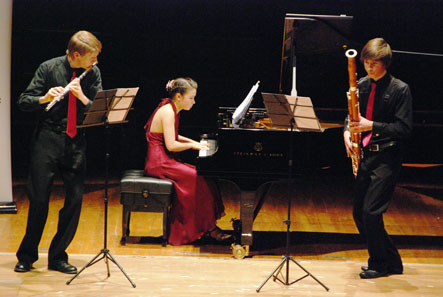