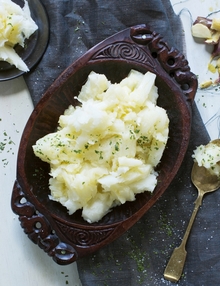 Mojo is believed to have migrated to Latin America from Spain and Portugal, via the Canary Islands. Starting around 1492 with Columbus’s trip to the Americas, Canary Islanders – or ‘Isleños’ as they’re called – were brought by Spain and Portugal to help colonise the Americas, being sent mostly to Cuba, Puerto Rico, the Dominican Republic and Venezuela. It was through these colonisations that the islands’ cuisine came to influence Latin America. Cuba is known internationally for its mojo. I’ve included it here as it’s very easy and packed with flavour. Traditionally, the dish is made using naranja agria, or bitter orange, but this version using orange juice is just as good. Yuca (cassava) is a cousin of taro and is widely used throughout Latin America because of its nutritional content, high fibre and being gluten free. If you can’t find yuca, make the mojo with mashed potatoes.

If using fresh yuca, remove the narrow ends and cut the main root crosswise into cylinders. Stand each cylinder on end and cut off the outer fibrous layer with a sharp knife. Cut each piece lengthwise into quarters (sticks), and cut off the bit of woody core in the inside corner. Frozen yuca usually comes already prepared. Chop yuca into 5cm chunks.

In a medium-sized saucepan, cover yuca with cold water, add 1 tablespoon salt and bring to the boil. Simmer for about 20 minutes. Meanwhile, prepare a water/ice bath. Drain cooked yuca and shock it in the water/ice bath. Return yuca to saucepan, cover again with cold water and reboil with the new water until yuca loosens up and you can easily put a fork through the pieces.

Don’t worry if the yuca breaks up but is still tough inside. Wait until it is completely soft throughout, about 45 minutes total cooking time. Leave in the water until ready to serve, then drain.

Combine orange and lemon juice with vinegar. Set aside.

Meanwhile, in a large frying pan, heat olive oil over a medium-high heat. Just before the oil begins to smoke, remove the pan from the heat and add the garlic, tipping it away from you so it does not splatter you. Wait for 2 minutes. Pour the citrus/vinegar liquid over the garlic to stop it cooking. Season with 1 teaspoon of salt and immediately pour over the drained yuca.

Chef’s note: Paraguayans cook yuca just until fork-tender, but Cubans cook it until very tender and almost falling apart – that’s how I like it. Cooking times can vary a lot depending on the type of yuca; there’s no rule for how long it will take to get fork-tender. Start testing with a fork 15 minutes after the water comes to the boil, and keep testing until it’s soft enough. You can also fry the yuca after it’s soft — it’s delicious and very popular.

Reproduced with permission from La Latina by Grace Ramirez