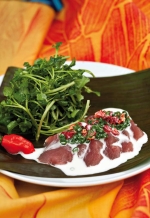 Me'a Kai: The Food and Flavours of the South Pacific by Robert Oliver with Tracy Berno and Shiri Ram.
Published by Random House.

Raw fish dishes abound in the Pacific and thanks to the world’s embrace of Japanese cuisine, including sashimi, Pacific Island raw fish preparations are coming out of home kitchens and onto restaurant menus. This Samoan version of sashimi is served as a starter with miki, a Samoan chilli and coconut sauce. Like miti in Fiji, miki is a chilled, all-purpose sauce and is great with cooked and chilled lobster, prawns or crab.

Chill eight serving plates. Cut the asiasi into logs about 5 cm across, as one would for sashimi. Sprinkle liberally with sea salt and pepper.

To make the miki, remove the rich, heavy upper layer of the chilled coconut milk (discard the rest) and place in a bowl. Add the chilli, spring onion and tomato and season with salt.

To serve, slice the tuna thinly against the grain, sashimi style, and place four or five slices on each serving plate, slightly off centre.

Toss the watercress with the Coconut Passion Dressing and place next to the fish.

Spoon the miki over the tuna and serve immediately.