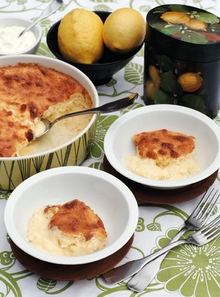 This is a magical pudding. As it bakes, the pudding separates and the delicate, softly set sponge cake floats to the top and the sweet-sour lemon-flavoured sauce sinks to the bottom.

I wondered about the origins of this recipe as most of my New Zealand-born friends remember it fondly from their childhood. My English friends, however, do not recall it at all.

I have found recipes for Lemon Delight, Lemon Sponge Custard, Lemon Pudding, Lemon Cheese Pudding and Lemon Sauce Pudding. In each recipe, the ingredients and the method are basically the same,only the name changes.

I checked my reference books and The American Century Cookbook by Jean Anderson traces the recipe back to Mrs Rorer’s Philadelphia Cookbook (1886). She has a recipe for a sour lemon pudding called Tout Fait into which the egg whites, ‘beaten to a stiff froth’, are folded in just before baking. The ingredients and the method are the same(the casserole dish is set in a shallow pan of hot water while baking).What happened after 1886 and when did the recipe arrive in New Zealand?

I rang Helen Leach, emeritus professor of anthropology, who has a vast collection of early New Zealand recipe books and after a little research she was able to fill in some of the gaps. Twenty-seven years elapsed before a similar recipe appeared in print. In 1913, the Boston Cooking School in America published a recipe for Lemon Sponge Pie, exactly the same dessert baked in a pie shell. It caught on in New Zealand very quickly with the identical recipe appearing in 1915 in the 7th edition of the St Andrews Cookery Book. It wasn’t until 1930 that the recipe as we know it today, same ingredients, same method but minus the pie shell, appeared in the North East Valley Presbyterian Church recipe book, Dainty Recipes, as Delicious Pudding.

I do not particularly like overly sweet desserts so this is a great favourite mine. With its golden, feather light sponge atop the sharpest lemon curd, this is a pudding that deserves to be served more often.

I prefer to serve this dessert at room temperature because the flavours develop more as it cools. It is also convenient as the pudding can be removed from the oven a couple of hours or so prior to serving, freeing up the oven for other cooking.

There are many recipes for Lemon Delicious but the quantities are usually to serve four. I have increased these a little and this is sufficient to feed six people or four very hungry ones.

Preheat the oven to 170ºC. Lightly butter the sides and base of a deep7-cup capacity ovenproof dish. I use a round dish 22cm in diameter and 6½cm deep.

Beat the egg yolks, sugar and melted butter together until thick and creamy. Stir in the flour, grated zest and the lemon juice. Mix in the milk.

Beat the egg whites until they form stiff peaks. With a large metal spoon carefully fold the beaten egg whites into the lemon mixture.

Pour into the prepared dish and place it in a shallow pan containing2cm of hot water. Bake in the preheated oven for 50–60 minutes until firm on top and golden brown.

Serve warm or at room temperature just as it is or with cream or lightly sweetened yoghurt.