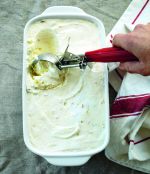 You don’t need a cumbersome ice cream maker to produce this velvety ice cream. The two secrets are using lots of sugar, which makes it difficult for ice crystals to form, and whipping in lots of air so it’s light and fluffy. You can use any type of citrus, but lemon and ginger are a match made in heaven. Combining cream and yoghurt makes it lighter and tangier than using all cream.

Lemon and Ginger Ice Cream will keep for 3-4 weeks in the freezer.

From The Free Range Cook: Simple Pleasures by Annabel Langbein

Combine sugar, lemon zest and juice and ginger in a medium pot. Stir over heat until sugar has dissolved. Bring to a boil and simmer for 5 minutes. Remove from heat.

While the syrup is boiling, beat egg whites in an electric mixer until stiff peaks form. On low speed, gradually add the hot syrup, then turn mixer speed to high and beat until cool and very thick (about 10 minutes).

Transfer to a large mixing bowl so you can use the same mixer bowl and beater (you don’t need to wash them in between) to whip the cream to soft peaks. Gently fold in the yoghurt, then mix in the beaten egg whites a little at a time, folding gently until evenly incorporated.

Spoon into a container, cover and freeze for at least 6 hours.

Best choice a medium style sherry but ideally let it stand on its own.