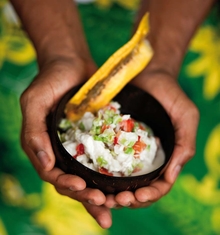 From Me'a Kai: The Food and Flavours of the South Pacific by Robert Oliver with Tracy Berno and Shiri Ram.
Published by Random House

In the South Pacific, there are many versions of kokoda and many other raw-fish preparations.

Kokoda (pronounced ‘ko-kon-da’) is Fijian raw fish; in Samoa it is known as oka and in Tahiti by its French name, poisson cru; it is ika mata in the Cook Islands and ota ika in Tonga. No matter which version, kokoda is the dish that seems to have best found its way to hotel menus, and hence it is the dish that nearly everyone who has visited the South Pacific has enjoyed.

In Fiji, it was traditionally made with a marinade of lime juice, chillies, onions and seawater — and walu (Spanish mackerel) is the preferred fish. I’ve been told that coconut milk was added in the 1930s by a Suva restaurant owner. Kokoda is now a fixture on every Fijian menu, always with coconut milk.

Cut the fish into 1 cm dice, discarding any bloody tissue.

In a bowl, mix the fish and the citrus juices and chill to marinate for two to three hours, or until the fish is opaque.