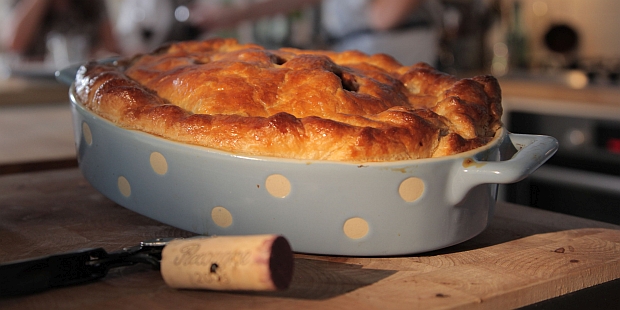 I met Donal Skehan in Dublin with my daughter, Lucy.  He publishes a beautiful award-winning food blog and has been named ‘Ireland’s answer to Jamie Oliver’.  His first television series, Kitchen Hero, was launched last year as was his third cookbook.

He is full of energy and fun and Lucy and I loved spending time with him in the kitchen where he made this lovely pie, using the nectar of Ireland, Guinness.

Heat 1 tablespoon of the oil in a large cooking pot and brown the meat in two batches, being careful not to overcrowd the pan. Remove and set aside on a plate.

Add another tablespoon of oil if you need it and fry the onion, carrots and celery for 6 minutes, until the onion is soft. Return the meat to the pot, along with the garlic. Pour in the stock and Guinness, add the bay leaf and season with sea salt and black pepper to taste. Simmer gently for about 11⁄2 hours until the liquid has reduced, stirring occasionally to make sure that it doesn’t stick.

Preheat the oven to 200°C (400°F), Gas Mark 6. Brush the edges of a 1.2 litre (2 pint) oval baking dish with a little beaten egg, then fill with the beef and Guinness mixture. Top with the sheet of puff pastry, pressing to seal the edges.

Cut one or two holes in the pastry lid to allow steam to escape, then brush all over with beaten egg. Place the pie in the oven to bake for 25–30 minutes, until the pastry has risen and has turned a crisp, golden colour.