Peppermint, a summer herb, grows very vigorously in our garden. I use it in salads but also as a heady herbal infusion. It's a very refreshing herb and this salad is much appreciated at barbecues because of its zingy flavours, which make a great counterbalance to barbecued meats. 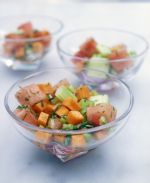 Place oil, lime juice, salt and pepper in a small bowl and whisk to combine. Pour dressing over vegetables and gently toss to coat. Serve immediately.