Götterdämmerung should provide a musical and theatrical knockout.

It draws all the Ring Cycle’s plot threads to their conclusion, and offers a series of set pieces which alternate abstraction with profound psychological depth.

Under Pietari Inkinen’s baton, the orchestra delivers some sublime music (if occasionally at a rather leisurely pace). The singing is uniformly excellent. Beginning with a wonderful set of Norns – including Jacqueline Dark in much better form than she had been as Fricka – it progresses most satisfyingly throughout the seven hours the performance takes in the opera house, concluding with Susan Bullock in vocally radiant form in the Immolation scene.

And yet, and yet…

The emotional impact of the opera’s events fail to register as they should, despite the vocal prowess of the cast.

Part of this may be due to odd staging decisions, as the designer Robert Cousins has located us in an entirely new world with only the most glancing of references to the previous operas in the cycle.

It’s true that the Norns’ prologue echoes a scene in Das Rheingold, as these guardians of time are not weaving, but sewing a damaged backcloth of a romantic hillside scene which looks as if it might have been familiar to Richard Wagner at Bayreuth.

However, from then on, each scene in the rest of the opera has a single set for all the varied locations, ranging from a mountain-top, to the Gibichungs’ hall, to the riverbank of the Rhine.

So what do we get to look at in this opera? A huge metal framework resembling the support structure for a wedding tent (which it actually becomes in Act II). It works extremely well in that scene (more about it shortly), but less satisfyingly in the finale, and not at all well when it is meant to evoke the mountaintop where Brünnhilde and Siegfried awaken from their bridal night, or the banks of the Rhine with the Rhinemaidens splashing about.

The death of Siegfried now happens not beside the Rhine, but by a shooting range where the Gibichung bodyguards are having firing practice. What the Rhinemaidens are doing there sashaying about in their Las Vegas outfits is never really clear.

The failure in the visual shorthand of the design is echoed by director Neil Armfield’s inconsistent approach to the action.

There are some splendid moments alongside others which undercut the power of the music. When the huge crowd of extras surge onto the stage to enact Siegfried’s Rhine Journey, they take up rowing positions – this looks spectactular as the house spins on the revolve.

Just moments later, however, dancers are jiggling about despite the darkening in tone of the music at that point. Although the score hints that Siegfried’s future is under threat, you’d never know this from what you see onstage. It’s a fussy and contrived irrelevance.

By contrast, the literalism of the second act in the wedding tent does work extremely well. The crowd management is assured, and the contemporary setting provides an instantly-decodable framework for the principals’ actions. And all the singers – from Warwick Fyfe’s remarkable Alberich and Daniel Sumegi as a Hagen in fine voice, to the tremulous Gutrune of Sharon Pero, and Barry Ryan as Gunther, puffing himself up into his new role as Brünnhilde’s husband – are completely convincing.

As Siegfried, Stefan Vinke is not the most subtle of actors, but his bright tone and effortless vocal power contributes markedly the act’s success. By this point in the opera, Susan Bullock’s heroine has matured into the figure who is damaged enough to take revenge on Siegfried before realising her error and setting in motion the destruction of the gods in the opera’s final act.

That final sequence, from Siegfried’s death on, requires imaginative staging to both deliver the emotion which the music is suggesting, and a degree of spectacle befitting the music’s vision of the end of the world.

We have come so far as the audience in the hours of music we have heard leading up to this point, and Wagner’s interweaving of musical motifs is so remarkable, that I’m not sure if anyone other than a Peter Jackson could stage a “realistic” version of the action. Wagner’s stage directions certainly have a startlingly cinematic feel to them.

The problem with this production is that Armfield’s directorial ideas are not strong enough to carry the weight of the music.

Even though real fire takes hold onstage as the house frame bursts into flame, the action which precedes this is a bit feeble. There’s no actual march to accompany Siegfried’s Funeral March, just some rather awkward redressing of Siegfried’s body in white. He is then stood up in the centre of the house, where he is joined by Brünnhilde once she has given instruction to a raven to inform Wotan that the twilight of the gods is now at hand. And why do we see the raven and not the horse Grane? A minor irritation in the scheme of things, but I still don’t know.

And although the music tells us of the Rhine overflowing its banks, and the Rhinemaidens returning the ring to its watery home, you’d never know any of this from what you see as this most monumental of scores draws to a close. Instead, the burning house keeps revolving, with Brünnhilde and Siegfried standing motionless inside it.

This world has mostly been one without ordinary people, even as observers (a role they played so notably in the Chereau and Lepage cycles). Although the crowd witnesses the Immolation scene, seated on bleachers upstage of the action, their reappearance signifies nothing as they have been used as mainly as abstractions to provide a bit of extra visual interest.

Although the score is extraordinarily coherent and powerful – emphasised by the weight of hearing the entire cycle in seven days – this Opera Australia production is not.

Perhaps that needs qualification. There have been thrilling highlights such as most of Die Walküre, but also low points like Siegfried, which failed to make much sense in the opera house.

It will be interesting, though, to see how it fares in video form – as the performances have been captured on camera, I hope that they will be be released on DVD. Viewed through closeup, the irritations of the full staging may be less apparent – and the strength of the individual performances exposed in a new way. It’s certainly been great to hear just the audio of the performances from the ABC’s website (though it’s a shame that each opera’s only been available online for 48 hours after the broadcast).

So, what of this Ring Cycle as whole?

By any standards, it’s a great achievement. Despite my irritation with aspects of the production, I’ve greatly appreciated the ambition of the enterprise, although I would have liked that scope to reach as far as Opera Australia ensuring that all of its audience could see the surtitles.

For this fundamental part of the contemporary opera-going experience not to be provided, for so unique an event, is not an example of Australian hospitality at its best. 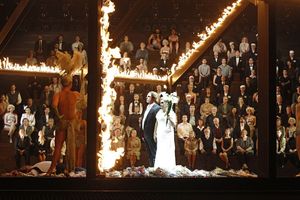