Juggling with Mandarins by V (Vicky) M Jones (2003) tells the story of a pivotal time in the life of a young boy. 13 year old Pip feels he is being called on to fulfill sporting ambitions his father can no longer achieve. Pip’s older brother Nick takes after his macho dad while Pip is more like his more sensitive mother and his baby sister Madeline. He hates being shouted at from the soccer sidelines by his dad and feels he can never live up to his expectations. His dad has a big chip on his shoulder since an accident took him away from his work as a fireman and the subsequent failings of his milk delivery business.

Pip is also struggling with his changing feelings for Katie, the girl next door. As well as learning to juggle mandarins, he learns how to juggle new feelings and relationships, and discovers he has a real talent for indoor rock climbing. In the end his father watches him climb and recognizes his son’s courage, not just in climbing. 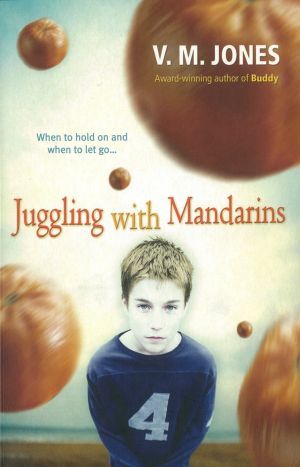 Juggling with Mandarins won the Junior Fiction category of the NZ Post Book Awards in 2004.

V (Vicky) M Jones was born in Zambia and educated in Zimbabwe. She completed a BA in English, Archaeology and Social Anthropology from the University of Cape Town and is a qualified gemmologist. Jones has lived in Christchurch with her husband and two children since 1997. She has written many successful books.

Matt Whelan is a Toi Whakaari graduate now living in Auckland. He's best known for his role in the television series Go Girls and in the NZ movie Show of Hands.