A one-off collaboration between a local super group and the mainland’s biggest band.

The Adults is the brainchild of Shihad’s frontman Jon Toogood, joined by Shayne Carter (Dimmer and Straitjacket Fits) and Julia Deans (Fur Patrol) – and others from time to time.

In June 2012 The Adults collaborated with the Christchurch Symphony Orchestra, conducted by Hamish McKeich to present new arrangements by Steve Bremner (who also plays drums here), Stephen Small, Hamish Oliver, and Claire Cowan of songs from The Adults self-titled album, and some new pieces. 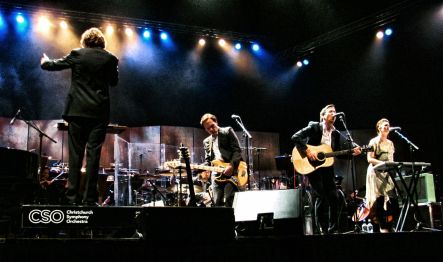 The Adults and the CSO, courtesy of Warner Music NZ.