As host of New Zealand’s top rating morning news programme for more than 35 years he has become a household name, known around the country as the voice of Morning Report.

Geoff Robinson joined the New Zealand Broadcasting Corporation in Dunedin in 1970 after emigrating from Britain in 1965. He joined the Morning Report team in 1975 when the programme was introduced.

Apart from four years reading news on the commercial radio network Geoff has been in the role ever since, working alongside more than 30 co-presenters during that period.

Geoff announced his retirement on 28 November 2013, saying “It’s time for me to enjoy a sleep in..." and set his final  broadcast date as 1 April 2014. Morning Report on that day featured significant stories and anecdotes from Geoff's career. 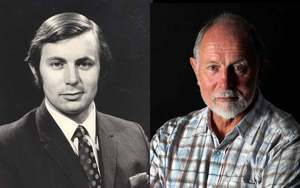 View a gallery of photos from Geoff's career See and hear all of our birds