The War Artist by Carl Nixon

Inspired by the work of New Zealand’s first official war artist, George Butler.
Butler is attached to a small burial party charged with taking an ambulance full of corpses and finding a suitable spot for burial. Butler is confronted with the role luck plays in a soldier’s life. 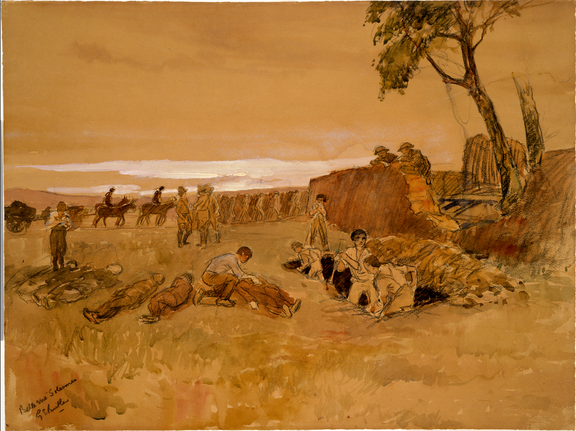 What’s the validity of creating art in the face of war?
Both poignant and humorous, The War Artist by Carl Nixon explores that very question.
The play is a two-part drama based on New Zealand’s first official war artist George Butler
and was specifically inspired by Butler’s painting Burial Party at Bellevue near Solesme.

Nixon stumbled upon George Butler’s work. “Butler sketched many striking and sombre images in the final months of The Great War, but the one that caught my attention was Burial Party at Bellevue Near Solesme. I printed out the image and wrote next to it ‘here is the play!’ How amazing that an artist sat and sketched men digging a mass grave to bury their New Zealand comrades – and so far from home. What is the point of such a piece of art, I wondered? Can it possibly help or even have a place in the face of four years of mechanised slaughter? Who were the men digging the grave and how did they feel?  Numb, dazed, angry, nothing at all?”