There's plenty of good TV on the streamers this month, says RNZ's Perlina Lau, who gives her take on six shows worthy of your attention in October. 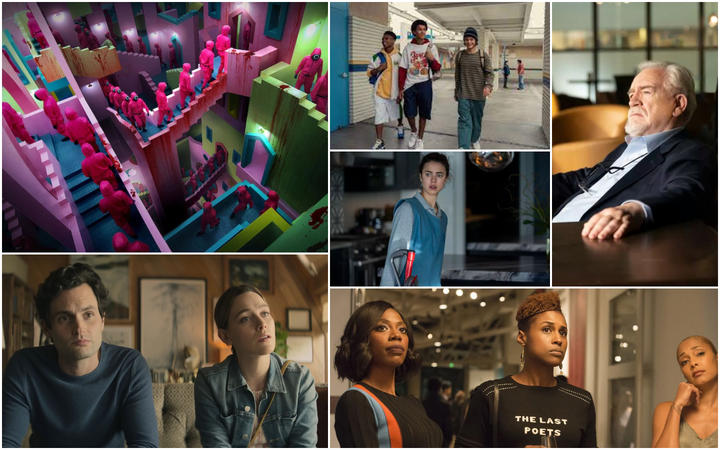 The return of this show will be a saving grace for many stuck in lockdown. I have heard people mention the name and rejoice.

A media empire led by Brain Cox’s Logan Roy and his sparring family; this Machiavellian drama is finally back for a third season after a cliff hanger ending in S2.

It picks up right where it left off with Logan reeling from Kendall’s betrayal of a hostile takeover and Logan deciding to step back and finding someone to take over in the interim.

Bad people doing terrible things with witty dialogue is usually a winning combo. This time we’ll see Alexander Skarsgård and Adrien Brody join the cast but don’t worry, Cousin Gregg and Tom continue to shower us with the gifts of over-confidence mixed with cringe-worthy incompetence.

Netflix’s stalker-murder-narrated drama is back with Penn Badgely’s creepy stalker murderer who disguises himself as a caring and thoughtful boyfriend. You is the epitome of “if I can’t have you, no one will.”

Season 3 sees Goldberg having moved out to the ‘burbs with his latest girlfriend who we find out isn’t too dissimilar from Joe and now, there’s a baby involved.

The second-person narration keeps the audience close while dangling twists and turns along the way. It’s a great trashy watch if you’re looking to switch off your brain and for a bit of entertainment.

Colin in Black and White - NETFLIX

Athlete and civil rights activist, Colin Kaepernick teams up with Oscar-nominated filmmaker Ava Duvernay (13th, Selma, When They See Us) in this limited series about the lives of Kaepernick and his well-meaning adoptive parents and their journey as they raise a black son in a white family and community.

Narrated by Kaepernick in the present day, it starts with a young Colin played by Jaden Michael and his parents played by Nick Offerman and Mary-Louise Parker.

Kaepernick rose to the highest ranks of American football becoming an NFL quarterback. You’ll likely recognise the name as Kaepernick knelt during the anthem before a game in 2016 as a protest against racial injustice, police brutality and systematic oppression in the US.

The move received polarising reactions with some praising his actions while others denouncing the protest. In 2017, former President Donald Trump had said NFL owners should be firing players who protest during the national anthem.

Kaepernick is currently unsigned by any professional football team.

The fifth season of Insecure comes out this week. It’s been exciting watching Issa Rae (show creator) starting out with her web-series, The Misadventures of Awkward Black Girl to moving to the bigger screen and now in the fifth and final season of Insecure.

The show follows two best friends as they navigate their 20s, careers and relationships in South Los Angeles. The close friends deal with internal struggles and the show looks at social and racial issues in the African-American community.

The friends spent most of last season fighting and apart so you can expect this season to be about their reunification.

The show was ground breaking for both Rae and black audiences - it was the second comedy created by and starring a black woman when it debuted in 2016.

The limited TV drama series is based on Stephanie Land's memoir Maid: Hard Work, Low Pay, and a Mother's Will to Survive. It follows a 29-year-old single-mother who’s fled an abusive relationship and starts working as a maid to survive as she tackles homelessness, poverty and red tape. It stars Margaret Qualley as the lead and Andie MacDowell.

Land wrote an article in 2015 which went viral, titled: I spent 2 years cleaning houses. What I saw makes me never want to be rich.

It gave insight into wealthy homes and lavish lifestyles; signalling the widening gap and inequality in America.

Land turned her experiences into a memoir in 2016 which eventually led to this show.

It’s currently on track to beat The Queen’s Gambit as the most watched limited scripted series with, according to the platform, 67 million households tuning in.

If you haven’t already binged this and found yourself occasionally humming the creepy red light/green light tune, do you even watch TV?

After receiving 10 different messages about this show in one week, I watched it in two days and spent the following two reading online articles, fan theories and looking at show-related memes.

This South Korean survival drama is Netflix’s most watched program in the platform’s history and took the top spot just 28 days after it landed. An unexpected hit for both the creator Hwang Dong-hyuk and the network.

Individuals drowning in debt are selected to participate in a series of games which are based on South Korean childhood games.

They’re simple in theory, but the consequence is death. Yes. If you don’t make it through that round, you die.

The players have nothing to lose at this point and their real lives where they’re constantly chased by loan sharks seem harder than playing for the potential $55 million.

The production values are slick with the games giving us colourful and bold sets which contrast with the dark nature of the show and the acting (except those American characters) is solid.

South Korean pop culture has been in the spotlight the last few years with the popularity of K-Drama, K Pop, Parasite and now, Squid Game.

Interestingly, South Koreans haven’t been as taken with Squid Game as the Western world and Hwang received relatively apathetic responses to the show.

He shopped it around for 10 years but there were no takers - until now. Netflix will no doubt be verrrrrrry happy with their investment - the platform has added another 4.4 million subscribers in this quarter.