There's plenty of good TV on the streamers this month, says RNZ's Perlina Lau, who gives her take on five shows worthy of your attention in September. 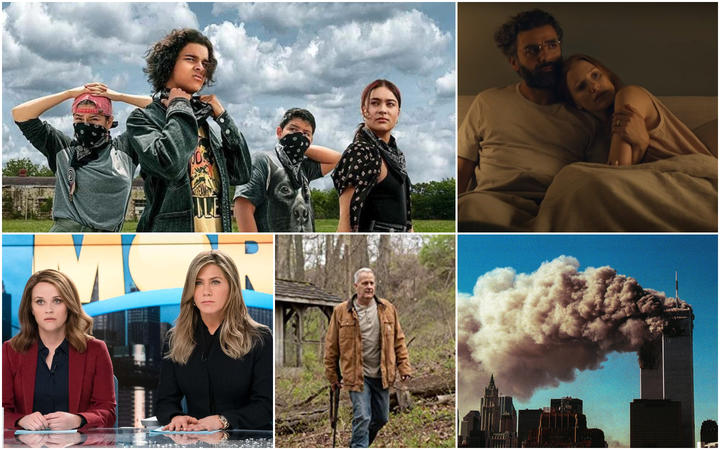 Kiwi viewers can finally see this coming-of-age comedy this month; a collaboration between Native American writer Sterlin Harjo and our own Taika Waititi. Although it's set in rural Oklahoma, even the trailer is smeared with Waititi's comedy and Kiwi-style humour we're all familiar with.

The story is about four indigenous teenagers who break the law hoping to get off their reservation and fulfill their dreams of escaping to California. In an area where there's few prospects for young people, it's about searching for their identity while also navigating living in modern America while on a reservation.

The show is the first series to feature all Native American writers, directors and lead cast members. It's been produced through Piki Films, Waititi's company which focuses on projects about the effects of colonisation.

This is a murder mystery set in (surprise, surprise) the rust belt, in Pennsylvania. Based on a novel of the same title, published in 2009, the rust belt refers to the dilapidated former steel towns in the US where there's been a decline of well-paid manufacturing jobs and young people have few prospects.

It stars Jeff Daniels as Bud Harris, the town's police chief, investigating a murder possibly committed by two teenagers. Harris is in love with the mother, played by Maura Tierney, (The Affair, ER) of one of the teenagers, which is where the complication and conflict begins.

Daniels will always either be Harry Dunne from Dumb and Dumber or Will McAvoy from The Newsroom to me, but for this show, he leans more towards McAvoy's character. The kind of person who will stare and perhaps do an internal sigh at incompetence and feels slightly aggrieved the rest of the world doesn't have the same outlook. Think Mare of Easttown, minus the sarcasm. I was almost waiting to see if Kate Winslet might pop-up to help solve the case.

This one's a slow burn, it's moody, grey and a bit depressing (as these parts of America are often portrayed), but the characters are interesting enough that you're invested and the mysterious plot line keeps you clicking 'next'.

Turning Point: 9/11 and The War on Terror - Netflix

I started watching this more for research purposes but it's a fascinating and I hooned through 3 episodes in one afternoon.

It covers the events of 11 September, 2001 with incredible audio, interviews and footage of the initial days and months following and the US decision to invade Afghanistan. But what's interesting is that it takes you right back to the Soviet occupation of Afghanistan, back in the '70s and '80s and the creation and rise of Al Qaeda and the Taliban. It explains the decades of conflict and geo-politics leading up to the 9/11 attacks. This year marks the 20th anniversary of the 9/11 attacks and of course, with the recent messy US withdrawal from Afghanistan, it feels particularly pertinent.

I procrastinated hard on the first season of this show because I couldn't bring myself to sign up to another platform and forget yet another password. My inbox is already a graveyard of "reset password" emails. But having worked in TV and breakfast shows, I'm very pleased I eventually caved and I'm very excited about this second season.

Steve Carrell and Jennifer Aniston are co-hosts of a New York breakfast TV show and have been for 15 years when Carrell's character, Mitch Kesler is fired amid a sexual misconduct scandal. Aniston as Alex Levy, continues the gig but she's been blindsided by the whole incident.

Understandably she has questions with the biggest being, will she also be replaced? Cue Reese Witherspoon's character, Bradley Jackson, who emerges as a feisty young reporter who the network executives pull from the field and decide to give her a shot in the seat. Season one ends with the two, going rogue on air, about the network's toxic culture and environment.

Steve Carrell plays an excellent a****** and is great at being entitled and unlikeable. If you've ever seen Way Way Back, his character reminds me of the stepfather role he plays in that film.

Aniston and Witherspoon both serve as executive producers of the show. Witherspoon plays a character which we've seen before. Sassy, feisty and independent but this is perhaps the first time I've seen Aniston play such a complex character, or at least one that is experiencing all the emotions all the time. It explores every angle and all the questions you could imagine her character would have in her position and I think Aniston executes it brilliantly.

There's been speculation the show was based on and parallels were drawn with the storyline and the real-life scandal with NBC Matt Lauer. But the first season of the show was announced several weeks before the Lauer allegations came to light. The show is instead based on Brain Stelter's 2013 book Top of the Morning: Inside the Cutthroat World of Morning TV.

Scenes from a Marriage - Neon

I think you'll have to be "in the mood" for this show but given the cast, I think it'll be a solid watch. It's created by Hagai Levi (The Affair), it's an adaptation of Ingmar Bergman's influential 1973 miniseries of the same name. The HBO mini-series follows the breakdown of a marriage between Jessica Chastain and Oscar Issac's characters. He's a philosophy professor and she's a tech executive and they have a young daughter together.

The show is entirely about the relationship between these two characters and the highs and lows so heavily relies on the chemistry between these two and they don't disappoint. Some scenes can be hard to watch simply because it feels so real and you're watching the disintegration of two people's communication. It's intimate and with a limited supporting cast so the show is carried by two stars.

If you're not convinced about the chemistry, there's a clip, which has been doing the rounds on social media and appears to have become the strongest piece of promo material for the show. It's Issac and Chastain sharing a slow-mo, intense moment on the red carpet at the Venice Film Festival. Steeeeaaammmy.