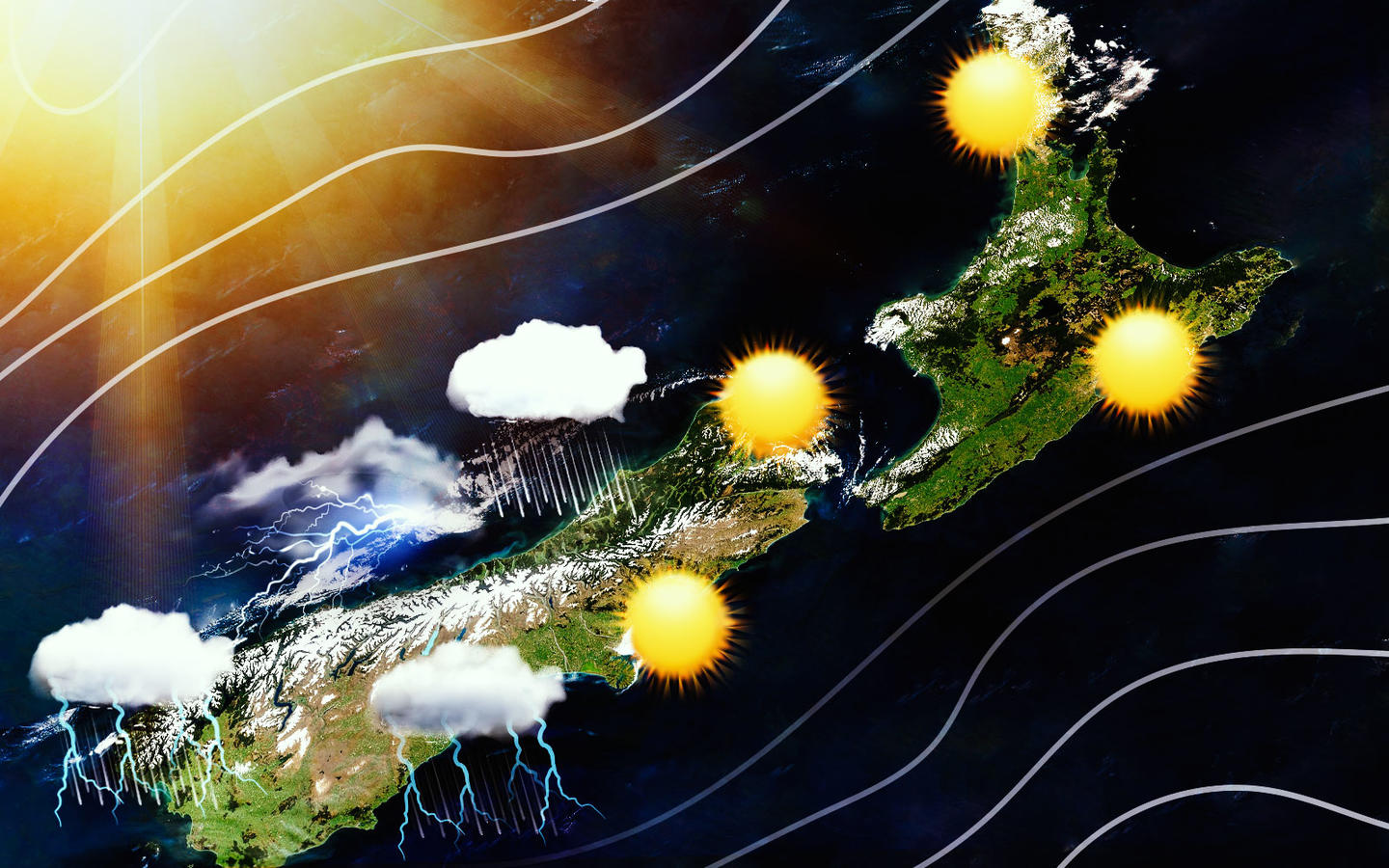 Auckland’s dams are half-empty and huge swathes of the country are reeling from one of the deepest droughts New Zealand has ever experienced. Climate scientists say: get used to it.

The drought began early this year.

Before January was even half-over, Auckland, Kaipara and Whangārei were already registering on the National Institute of Water and Atmospheric Research’s drought index.

By February, six more districts had joined them, rising to a peak of 35 districts by 1 March - almost the entire North Island and large parts of Canterbury and Marlborough.

All over the country, records tumbled. Thames-Coromandel spent 95 consecutive days in drought, according to NIWA’s index - the longest drought period anywhere in the country since the index was introduced in 2007. 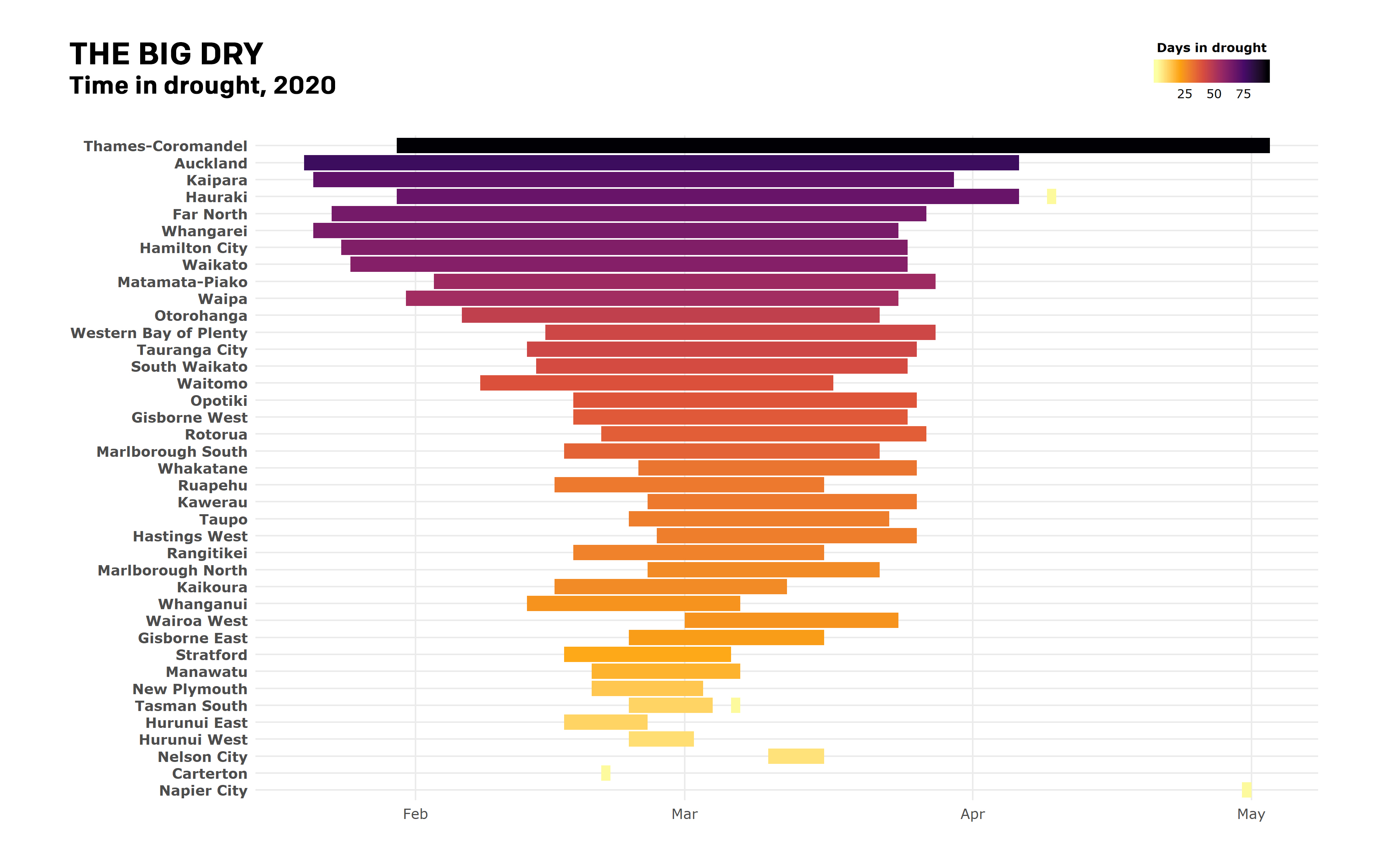 Auckland’s status dropped to ‘extremely dry’ on 7 April but although the region was no longer technically in drought, water levels in its 14 dams continued to fall.

The water crisis is now so trenchant, so prolonged, that it is visible on satellite imagery.

In images taken between November last year and May this year, the edges of the four major dams in the Hūnua Ranges, which supply about 60 percent of the region’s water, gradually shrink away from the verdant bush surrounding them as their silty banks are exposed.

Halfway through June, the Hunua reservoirs are at 44 percent capacity - way below the historical average for this time of year of 77 percent.

“This is one of the most extreme droughts that Auckland has ever experienced,” NIWA climate scientist Abha Sood says.

But what’s considered extreme now is just the beginning, she says. “This is a wake-up call. It happened now, but it’s likely to happen in the future also.”

Climate change headlines and debate tend to focus on the mean average increase in temperature the earth may experience, depending on the actions humans collectively take now and into the future. The Paris climate accord agreed to hold global warming to under 2° Celsius and to aim to limit the increase to 1.5°.

But Abha Sood says it’s the changes in weather extremes that are most noticeable to humans: “If there's a change of say, one degree over the past hundred years, it's very hard to feel the change, but because the change in the mean [temperature] means a change in extremes, you do tend to experience more extremes. There were very warm temperatures in the South Island, places like Dunedin, in the past year, which are totally unusual and unprecedented.”

In other words - you might not notice a gradual year-on-year temperature increase, but you sure notice a heatwave.

Sood and her colleagues have compiled and analysed data from weather stations around the country to build future projections of how the weather we experience now could grow ever more extreme over the next 80 years.

NIWA's projections are based on four scenarios, known as representative concentration pathways, published by the Intergovernmental Panel on Climate Change. The pathways range from a best-case scenario of decreasing carbon dioxide concentrations in the atmosphere by 2100, through to a scenario where the levels continue to increase throughout this century.

RNZ has used NIWA's data to visualise two extremes - the number of ‘rain days’ each season, when at least 1mm of rain falls; and ‘hot days’, when the maximum temperature gets over 25°C.

The visualisations show the worst-case scenario - because at the moment, with no significant curbing of emissions taking place, this most closely reflects the version of the future that the world is headed for. “If we don't act soon, then we’ll be closer to that pathway,” Sood says.

In most cases, the changes will reflect weather patterns now: hot places will get hotter; wet places wetter.

Right now in areas like Auckland or Whangārei, there are about 30 days every summer where the mercury shoots up to 25° or more - roughly one in every three days.

That’s already hotter than it was 50 years ago, when the two cities experienced maybe a dozen ‘hot days’ each summer - balmy beach days interspersed with comfortably warm periods.

By the middle of this century - not all that far away - the number of hot days could nearly double, to 50 a summer. By 2100, within the lifetime of children being born now, nearly every summer day will be a ‘hot day’ in Auckland and Whangārei. The cool days of respite will be over.

Spring rainfall in both places is projected to diminish - meaning it will already be drier when summer begins.

In Northland, even winter rain days are projected to decrease, meaning droughts could become severe, Sood says. “You might have back-to-back droughts - you don’t even have time to recover your water levels in the winter before on comes the next drought in the next year.”

In other regions, the rain might still come - but at the wrong time.

“Regions such as Nelson, the Tasman region, has increasing winter rainfall,” Sood says. “They have relatively heavy winter rainfall but in summer they have much deeper droughts. The rain comes in the wrong season - it’s not the growing season.”

Queenstown shows a similar trajectory - with a marked shift in rain days from summer to winter, double the number of hot days in summer, and fewer frost days.

Cities such as Dunedin and Christchurch, which both have large low-lying areas, are likely to get rainier in winter. “Parts of Dunedin, parts of Christchurch and even parts of Auckland might be prone to more frequent inundation,” Sood says.

While Dunedin is projected to experience only a handful of ‘hot days’ even by 2100, giving it a climate similar to Auckland’s 50 years ago, Christchurch could spend half its summer baking in plus-25° days by that time.

The projections are similar for Napier, which could experience fewer spring rain days, followed by hotter summers.

The combination of hot, dry days followed by a deluge is a dangerous prospect, not just for flooding, but for future water quality, Sood says. “Because the soil is very dry and not able to absorb any water, there’s this sudden flush of contaminants that, because of dryness, have accumulated over time. That’s likely to cause huge water quality concerns.”

The pace of change in some regions could be startling. It’s rare for Wellington’s summer temperature to go beyond 25° now but the NIWA projections show that within 30 years, the capital could have 20 or more hot days every summer, with a handful in spring and summer as well.

Sood says some of the projections - and even changes that are already happening - raise questions about when to adapt, and when to call it a day.

“You can’t fight a huge force of nature. It doesn’t really care what you think… You could try to do as much adaptation as you like but sooner or later we [may] have to give up on certain regions. It’s a question of how much you wish to invest at present.”

The data used in this story was downloaded from NIWA’s Our Future Climate website. Following the recommendation of NIWA, RNZ has used the six-model average and representative concentration pathway (RCP) 8.5, which most closely resembles the current climate future (i.e. no significant curbing of emissions). You can view the full data analysis used in this story here.