Small animal skulls sit alongside shells, a ship in a bottle and a carved Māori head in one of the cabinets in the workshop of typographer Tara McLeod.

On a nearby shelf, a blonde doll’s head peeks out disconcertingly from bottles of ink.

Elsewhere thousands of individual metal and wooden letters for his trusty letterpresses are nestled alongside old bottles, ceramic angels, pipes and boots. 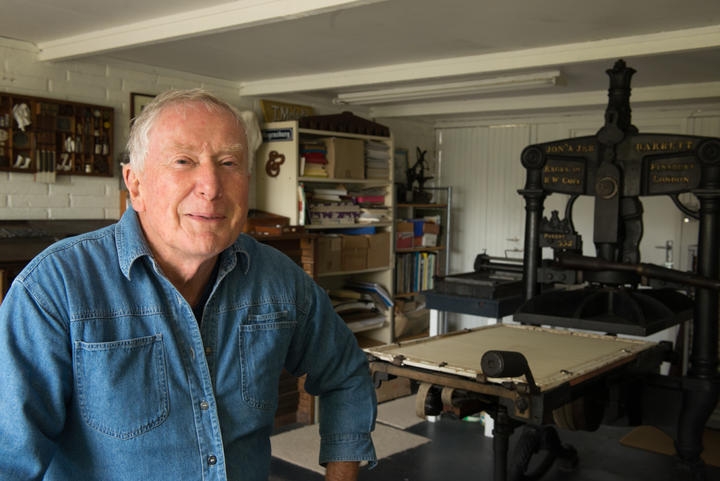 Tara McLeod in his studio at his Albion Press Photo: Liz March

“Inspiration comes from a variety of sources,” Tara says in his book Tara McLeod, A Typographic Journey.

He’s one of our most experienced and respected typographers and as well as telling his own story in the book, we’re offered perspectives on his decades of work from a range of contributors.

McLeod grew up in a home filled with art and books, his father being an arts patron. He became an apprentice compositor in the 1960s working with an Auckland printing company.

A few years later he worked at Pelorus Press with Ross Denis before starting his career as a commercial artist primarily working for advertising agencies.

He moved it into the old milking shed on his West Auckland property, spending months lovingly restoring the press. It and the family moved to Mt Albert in the 1980s.

McLeod started Pear Tree Press in 1985 after installing the Albion in an old brick shed in the Auckland suburb of Mt Albert.

“A decision needed to be made, do I enter the computer graphic design scene, and continue as a ‘hobby printer’ or move over to the world of letterpress, he says.

“A quote from Alan Loney, master printer, who was my mentor, helped influence me.

“One chooses either to simply muck about in the shed with an old printing press or to acquire at considerable labour, cost and some risk to one’s emotional stability, standards of excellence comparable with the finest anywhere in the world.” 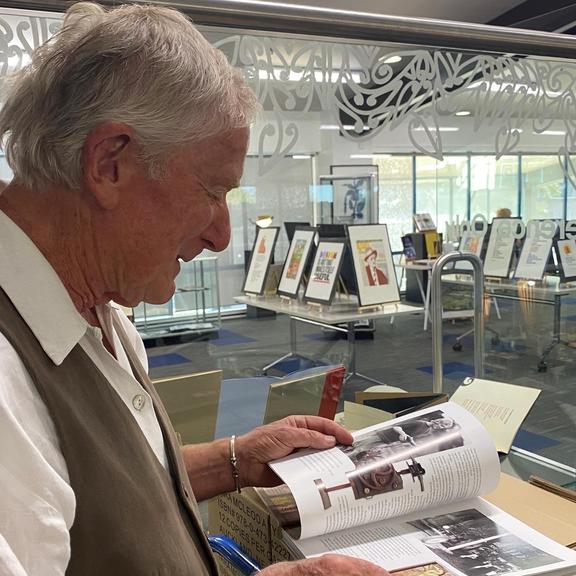 In 2009 McLeod and Christine moved to the coastal town of Orewa. By then, all these collected treasures had been joined by a Littlejohn press.

I asked him to describe his studio.

“I’m fortunate in having a large comfortable working area with a small attached woodwork shop and storeroom.  There is an eclectic collection of prints, artwork, books and collected objects,” he says.

“The focal point is the still operational, 1832 Albion hand-press, with a height 6ft 6in needing a hole cut in the ceiling to accommodate it. And a more recent, circa 1960 cylinder press. Plus all the other essentials, cabinets containing the trays of metal and wood type, and the dozens of other requirements.”

Poets whose writing he’s printed and illustrated include James K Baxter, Denys Trussell, Michael O’Leary, Riemki Ensing and Brian Gregory.  There are also numerous works based on the work of James Joyce’s Ulysses.

So what kind of work does he find most satisfying?

“There are always limitations due to the nature of the letterpress process, but texts that can be experimented with typographically are exciting, challenging and ultimately satisfying. The 3-dimensional pieces take a new level of creative thinking, and of course, more time consuming and a different skill level.”

And from the client’s perspective, what's the appeal?

“In the computer age, being able to create an object with the look and feel that says ’not computer-generated’ but instead a creation of particular quality with the presence of the maker’s hand,” McLeod says.

“Also being able to create with a totally manual process using equipment that has stood the test of time and the satisfaction of working with a technology that one has complete control over." 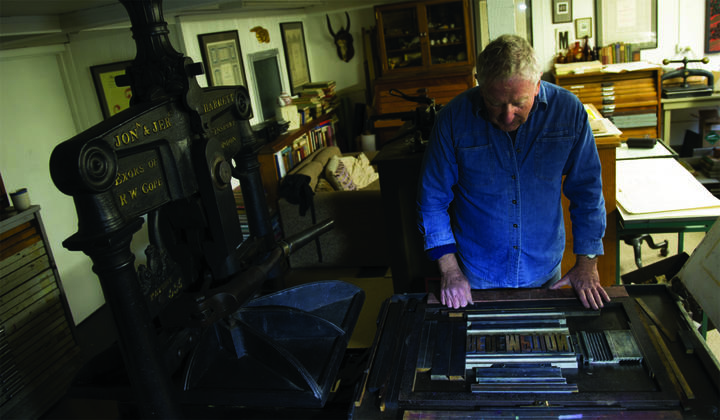 In the book, McLeod talks about a “strong resurgence of interest in letterpress printmaking.” I asked him what’s behind it.

“After the end of commercial letterpress much of the equipment was scrapped, so like many technologies, once they’ve gone, the next generation finds it of interest,” he says. “After about the year 2000 the new wave of graphics people became interested in how the type they use was created.”

“Where letterpress typography was once only a medium for printed communication, there is now the opportunity to explore this medium as an art form. Instead of floating anonymously on a computer screen, the letters are physical objects to be picked up and handled. With the provenance that goes back over 500 years to Gutenberg to be reflected on.”

McLeod says while it’s important to respect the past, part of the joy of what he does is experimenting and exploring the medium.

“As printers, our creative thinking can be inhibited by 500 years of tradition. There is a danger of clinging too closely to these traditions and not embracing the new wave of creative ideas,” he says.

“To move away from the uniformity of tradition, and to take letterpress to another level we need to break rules, to push boundaries, to stand letters on their heads – to play. All this within the challenge of working with inflexible materials. Design thinking never stands still.”

“Achieving a certain level comes after some years of working within the letterpress medium, including an interest in contemporary art, and how it pushes boundaries and bends rules, the same can be applied within the confines of letterpress art.” 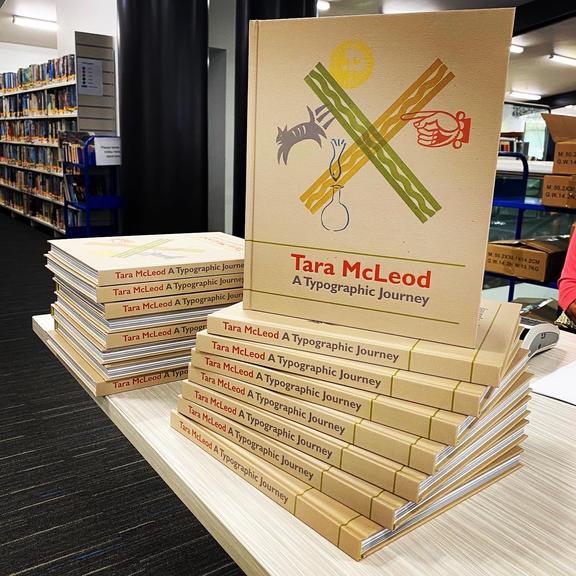 “The old metal printers blocks were acid-etched and that process is thankfully long gone. Replaced by the photopolymer plate, a plastic material that is made by the water etching process. Easier to make, faster and cheaper.”

“Much original wood type still in use today dates back to early 20th century, some even earlier, much of which is becoming worn. So the laser looks to be the future of wood type. Any font on your computer can now be laser cut. Though this is still in its infancy, the potential gives an encouraging future for letterpress, creating availability of new wood type.”

“The laser can bypass the traditional printers stock sizes and styles – wood type could be created now in any size, any font, and in perfect condition,” he says.

“This raises the question of using the computer to create the fashionable ‘distressed’ feel of worn wood type for a 19th-century look favoured by some designers. Good printers in those days would have strived to get as perfect a result from their wood type as possible.”

But McLeod points out that like most art forms, a thorough study and ‘apprenticeship’ of the craft behind it is essential to the production of fine printing.

“Anyone working with this technology has a direct link back to Gutenberg and the early master printers.”

The new book explains and illustrations the kinds of projects he most enjoys working on these days.

“Most of the printed work in the book is designed around the written word, so there are two elements: typography and a text to be read, so the graphic work should convey the meaning and encourage the reader, McLeod says.

“I think it important to say: poets and writers spend a lot of time crafting their words, so the typographer has the responsibility as an interpreter of the writers work to present the words in a sympathetic fashion to invite the reader to become involved in the text. As opposed to design that is difficult if not impossible to read and can discourage the reader.”

I asked McLeod what personality types suit typesetting and printing.

“Patience is essential as the work is labour intensive, time-consuming and requiring attention to detail. And it helps when discovering you’ve made a typo and have to reprint a page,” he says. “Also being able to have quiet thinking time, working without noisy machinery, loud music and a flashing computer screen."

McLeod feels very confident about the future for press printing.

“Design students today agree that the manual process of working with one's hands, getting them dirty is a rewarding experience, so the millennial generation is showing interest and enthusiasm. This plus the merging of the two technologies, letterpress and digital, and as mentioned earlier the design process never sleeps ... It's a vibrant future for letterpress typography.”

Tara McLeod, A Typographic Journey is published by Katsura.