Jacinda Ardern and Grant Robertson are leading from the front as the country’s busiest ministers, according to new data released by the government.

But the same data shows Winston Peters holding just a third as many meetings as the Prime Minister. 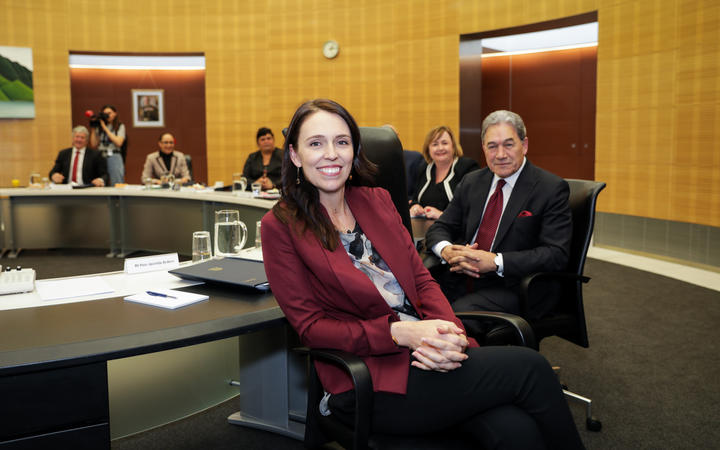 The Labour-led coalition has opened its ministers’ diaries to public scrutiny for the first time, revealing just how the people running the country spend their days.

While five ministers missed the deadline, RNZ has analysed the 98 percent of data available - nearly 37,000 diary entries. The diary entries reveal the Prime Minister unsurprisingly has the most appointments of anyone in cabinet, with 2512 and counting between the formation of the coalition government and the end of April.

Peters, the Deputy Prime Minister and leader of New Zealand First, has held just 880 meetings in the same 19 month period and ranks near the bottom of the list.

The other ministers holding the most meetings are Finance Minister Grant Robertson with 2057, Attorney-General, Economic Development and Trade minister David Parker with 1882, Housing and Transport Minister Phil Twyford with 1794 and Justice, Treaty Negotiations and Pike River Re-entry Minister Andrew Little with 1751.

Of the ministers who have reported their diaries, Employment Minister Willie Jackson held the fewest meetings with 506. He’s followed by Minister for Women Julie-Anne Genter with 788 and Peters.

Jackson said, “I’m not surprised at all because I’ve only got one portfolio. So it’s not comparing apples with apples. And I’m not in the business of having meetings for meetings’ sake. Don’t get me wrong, I want more and more. I’m happy to take on a few more portfolios!”

He said, for example, the past month his focus had been negotiating the budget on behalf of the Maori caucus, “working hard getting resources across the line for Maori. And we don’t list any of those meetings”.

The records released are hardly exhaustive however, only capturing those meetings and events carried out in the MPs’ capacity as minister. While the release is the first time the public has been allowed to see how ministers spend their time and who they meet with, the diaries do not cover personal, party political or constituency meetings. The minsters choose themselves which meetings should be excluded under those rules.

Peters has previously told RNZ as Foreign Affairs minister and a party leader, he has many meetings that “are not disclosable”. He was not enthusiastic about the release of ministerial diaries and this was a coalition policy he had just gone along with.

So how is your government spending its time? It’s the economy, stupid. Ministers have held 3353 meetings which they have described as being on the economy. Maori issues have been the second most popular reason to meet, at 1823. Next, ministers have held 1761 meetings on justice and 1569 on education.

Despite housing and poverty reduction being at the heart of Labour’s election campaign, the government has spent only a third as much time discussing poverty and welfare as it has the economy. It held nearly twice as many meetings on the economy as it did on housing.

Overall, ministers spend more than half of their time in meetings; 18 percent of their ministerial time is spent specifically in scheduled briefings with officials. Another 13 percent of their time was taken up by cabinet or cabinet committee meetings. That’s the same amount time (13 percent) they spend communicating with the public via media interviews, with another four percent given over to speeches.

To analyse the ministerial diaries, RNZ created a database from the documents published online by ministers’ offices. We then categorised diary entries into broad topics using keyword searches – for example, the “climate change” topic searched for keywords like ‘climate’, ‘greenhouse’, ‘carbon’, ‘ETS’, ‘emissions’, ‘IPCC’; and variations of those words.

The keyword searches were extensive but not exhaustive, and so not every diary entry has been categorised by topic – however, about two-thirds have.

In an attempt to break down meetings in terms of specific policies discussed, RNZ identified 106 meetings concerning Pike River, 47 on the tax review, 54 on the provincial growth fund and 13 on Kiwibuild. All other policies noted were in single digits. Not all meeting details mentioned policies, however, so RNZ is relying on the words chosen by ministers.

Since March 15, one topic has been a prominent reason to meet. The Christchurch mosque attacks are noted as the reason for 115 meetings through March and April.

A separate search for pairs of words – which includes all 35,000 diary entries – found the 10 most common phrases in the diaries (excluding logistical details such as ‘Cabinet Committee’ and ‘Parliament buildings’) were:

The government announced in December it would proactively release the diaries to help “build trust and confidence in government”.

* Since this story was first published, some ministers who missed the original deadline have released their data. The numbers in this story have been updated to reflect that.