How difficult - dangerous even - can it be working in a museum?

You get glimpses in Denise Ho’s rather fascinating book, Curating Revolution: Politics on Display in Mao’s China. 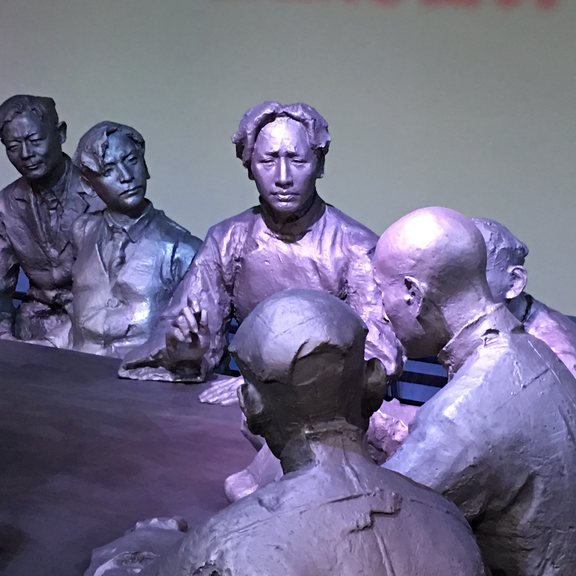 Exhibit One: The poor guy who was asked to put together a museum commemorating the foundation of the Communist Party in 1921 and, naturally, the central place of Chairman Mao in it. Except all the historical records showed he was, ahem, not central; certainly there and present but not one of the main delegates. And Mao and the Party were watching.

Exhibit Two: The young curators of art, especially one very brave young woman, at Shanghai Museum who slept by an emergency phone line during the worst years of the Cultural Revolution so they could rush to the site of any art sackings. There they would convince the Red Guards that the best artworks were actually examples of proletarian worker art and relabel them. They are said to have saved thousands, possibly hundreds of thousands, of priceless art works.

Stories like these lift this book from an academic treatise on Communist museum-making into a fascinating story of people trying to balance the demands of the Communist Party with their belief in art and exhibits.

Ho is an historian to remember. A professor of modern Chinese history at Yale University, she is fascinated by the culture and propaganda of the era of Mao. She is also a commentator on the relationship of Hong Kong and China. Her next book will focus on Hong Kong, as well as Shenzhen, at the edge of China. 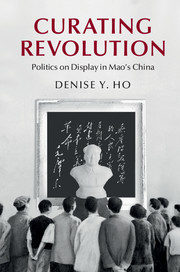 But, in the meantime, this is a book which may be largely overlooked, filed under academic works, yet was one of the books of 2018 on China which I kept coming back to. She tells her story through six museums - the founding of the Shanghai museum and its survival through the Cultural Revolution, the museum at the Site of the First National Congress of the Chinese Communist Party, travelling exhibits to show how life had improved under Communism and how life before was like “eating bitterness” and preserved lanes of houses to show the squalor of life before the Revolution and new showcase buildings to paint a picture of a better life under Mao. Her point is how ideology shaped the stories of the museums and exhibits and how the artefacts on display were chosen as “living textbooks” to promote and teach the Revolution.

Shaping exhibits has been in the headlines recently so this book arrives at a good time. This year marks 40 years since Deng Xiaoping's market reforms but some exhibits have started to downplay the images of Deng and replace them with current leader Xi Jinping. One museum closed for an "upgrade" then removed its front mural of Deng and reopened with video displays of Xi, implicitly associating him with the reforms which enriched China. 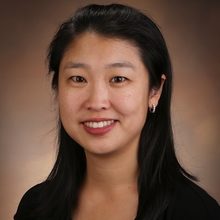 What makes Ho's book hum is her access to all the records kept by the docents, or tour guides, as they assiduously recorded peoples’ reactions, questions, their mistakes and suggestions. Ho shows us tour guides struggling at times to square the required message with the shifting nature of politics; it was always hard for guides when some politician fell out of favour and had to be skipped over in the grand narrative. Alternatively, Ho records museum-goers moved to tears by exhibits of hardships, famines or the rapaciousness of landlords. She is especially good at the Questions and Answers the tour guides had to learn for tricky questions, like “Did it really happen like this?”. At times, tour guides were taught to reply “it is unclear” if they were getting onto tricky ideological ground. Or they became adept at changing the subject.

The opening scenes at the Party founding memorial and the closing scenes in the under siege Shanghai museum are especially striking. 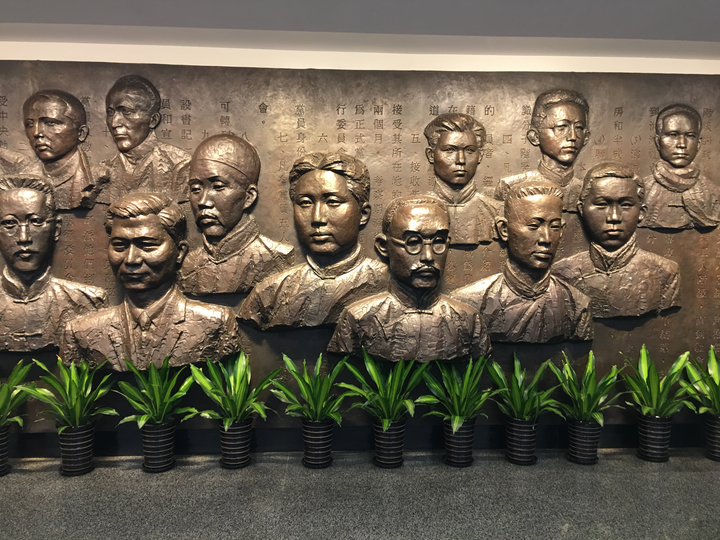 A new mural of the founders of the Chinese Communist Party Photo: Supplied

Visitors today can still go to the museum commemorating the site of the first Party Congress at 374 Huangpi Nan Road, Huangpu, now surrounded by upscale shopping boutiques in Shanghai’s old French concession. But, when the Museum was ordered in the 1950s, says Ho, no-one could quite recall where exactly the meeting, attended by just 13 people, was. It took months of checking and tracking to find the upstairs rented room and confirm it was the place. 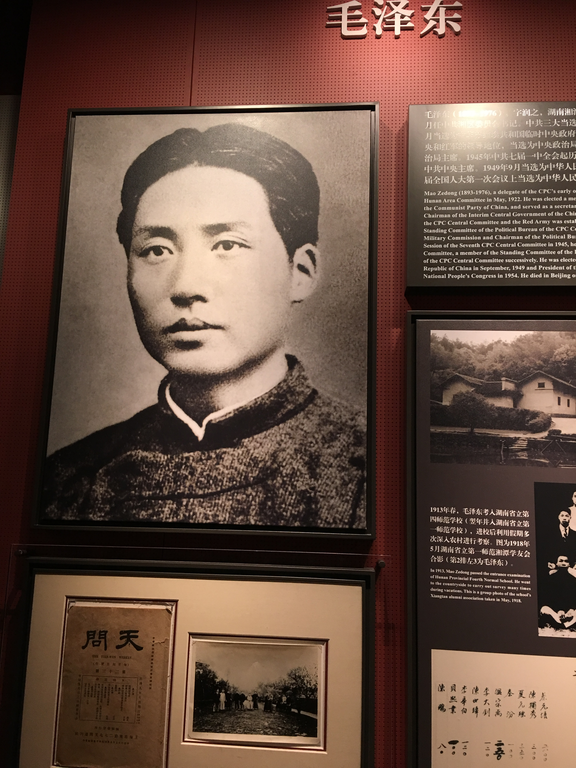 Once found, the difficulty for the creators was ensuring that the Museum followed Mao’s “Red Line” of thought. Simply, it had to show a direct progression from the founding of the Communist Party through Mao’s thought, enshrined in the party and China’s constitution, to today. A museum was not a restored building; “it was an active propaganda organ for Party and revolutionary history.” Not a description of events but an argument.

Mao was certainly at the first party congress but he was not the central figure. The two main protagonists, Chen Duxiu (elected General-Secretary) and Li Dazhao, were absent. Yet the museum needed to reflect Maoist thought so it was filled with posters to show that Mao’s interpretation - a revolution among peasants in rural areas - was right whereas Chen Duxiu - who emphasised industrial workers in the cities - was wrong. The museum constructed a revolutionary tradition to show Mao was right. One tour guide, quoted by Ho, points out that “if you mentioned the founders of the Party there was only Mao Zedong and Li Dazhao. By the Cultural Revolution, you couldn’t even speak of Li Dazhao.” 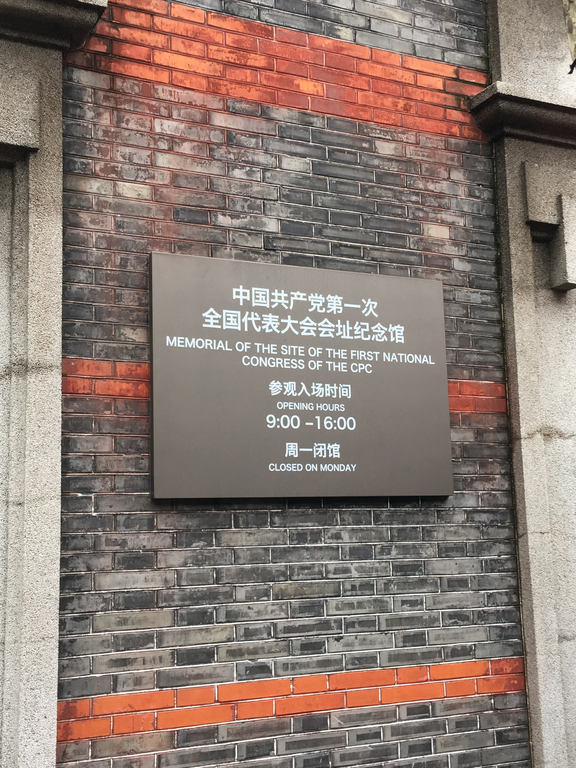 One of the chief difficulties was that of the original 13, only two (Mao and Dong Biwu) were still in the Party when it took power in 1949. Some had been killed, others purged, still others had split or turned out to be “Trotskyites”. Tour guides had to gloss over such facts. One script was written for general consumption, omitting the names of deviationists; another one was created for experts. Any difficult questions beyond that got the “it is unclear” answer”.

Thankfully for tour guides, by the time of the Cultural Revolution the docents’ script had been replaced by a tape recorded message so there could be no mistakes. For Ho, this points up the difficulty of having a revolutionary site monitored and used by a government in power.

Shanghai Museum and the "Four Olds"

Equally as fascinating is Ho’s portrait of the efforts of the Shanghai Museum curators to save artworks from the conflagration of the Red Guards’ zeal to rid China of the four “olds” during the Cultural Revolution, effectively to eradicate the past so China could progress.

The young curators, including the heroic Zhong Yinlan a young female curator, would sleep next to a hotline, with a fleet of trucks waiting outside, so they could converge on any attack on the Four Olds and step in to divide the goods into disposable “olds” and things to keep, “wenwu” or artefacts worth saving. Shanghai, once known as the Paris of the East, was ripe for the Red Guards proletarian zeal and they would pick bourgeois houses to ransack. Sometimes Red Guards would phone the hotline, other times art collectors would. 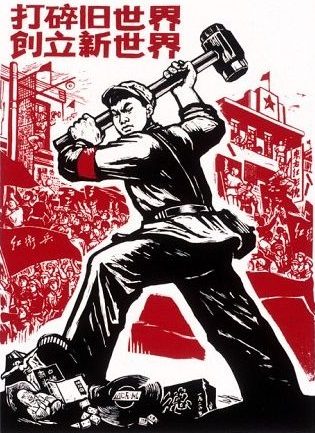 Ho tells the story of one art collector and industrialist who got on the wrong side of the Guards, helping the Museum workers to uncover his stash of great works. “Take them away, take them all away, don’t leave a single thing behind,” he urges them. The curators would catalogue them in case they should be returned later. Sometimes art or book owners would destroy their own collections rather than risk the Guards’ wrath.

One of the key moments was when a group of curators - the Wenwu Small Group - managed to shift the definition of the Red Guards. Instead of fighting the Cultural Revolution’s destruction, they redefined it. The Guards themselves saw some difference between the disposable old art and wenwu artefacts to preserve, so the curators worked with that. They compiled an explanation for the Red Guards extolling them for raising Mao’s thought and praised them for finding and returning artefacts to the working masses - but pointing out they could be stored in the museum in the short term.

Today, the Shanghai Museum is very much on the list of must-sees for tourists. If you go, spare a thought for the work of the curators who Ho documents. Their work is all around.