A new book examines China’s skewed gender imbalance with a surfeit of rural bachelors and a generation of “only daughters” entering the workforce and marrying age. 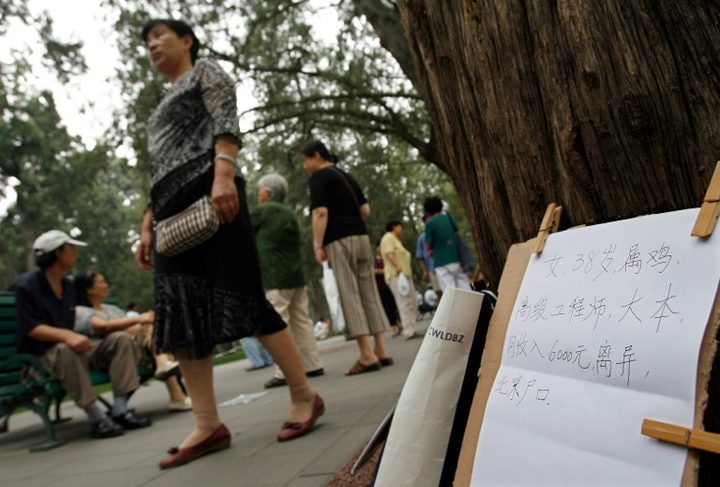 China’s One Child Policy has left it with the most skewed gender imbalance in the world. Last year, two years after the end of the policy, which was in place from 1979 to 2015, there were 34 million more males than females.

In one extraordinary scene in Leftover in China; the Women Shaping the World’s next Superpower author Roseann Lake visits a village filled with three-storey buildings which she assumes to be churches, only to discover every bachelor in the village is competing to build the largest home in town to attract a mate.

But Economist correspondent Lake’s main focus in the book is on the women of China.

Girls born in the one child era have often been lavished with the attention, resources and affection that once fell to the eldest boy, she says.

They inherited family businesses or studied in tertiary education and became upwardly mobile at a time when China’s economy was booming.

New jobs opened up for young women in the cities and so they could leave behind the rural men and their three-storey edifices.

Newly empowered, this generation of Chinese women however struggle to balance the demands of relationships and working life.

Zhang Mei, a teacher, feels the pressure from her parents to get married now she is 28 and a year beyond the “ideal” marriage age; Ivy who prefers to live as a mistress off the gifts of wealthy men and Party members and a colleague who desperately wants a baby, buying up baby clothes on Taobao, China’s online shopping portal, but can’t find the right man.

For them, a cultural clock is ticking; society assumes they should be married by 25 to 27 in the cities, earlier in the countryside. If not, they are “sheng nu” or “leftovers” - rural bachelors are “guang gun” or “bare branches”.

Pushing them to marry is a phalanx of parents. For centuries, the family unit has been the economic unit of Chinese life, providing care for the elderly, welfare for the poor and support for raising children. So parents are eager to marry off their children, advantageously.

The parents of rural bachelors help build giant homes; the parents of urban women resort to every trick to get their daughters married young.

You can see them every weekend in parks such as Zhongshan Park near the Forbidden City, Beijing where parents congregate to advertise their single offspring’s virtues.

They put up posters setting out their child’s assets - property, CV, academic record, job chances, bank accounts - and sometimes list what they are looking for in an in-law.

In one episode, Lake goes to a singles match-up; nobody talks to each other, they are too busy photographing the wall of CV posters.

Lake recounts one toe-curling episode when a mother set her daughter up for an online chat with a prospective (and wealthy) man. After a few online meetings, discussions fizzled. Weeks later the daughter used her parent’s computer only to discover her mother logging on as her and doggedly chatting and flirting with the man in an effort to keep him interested. 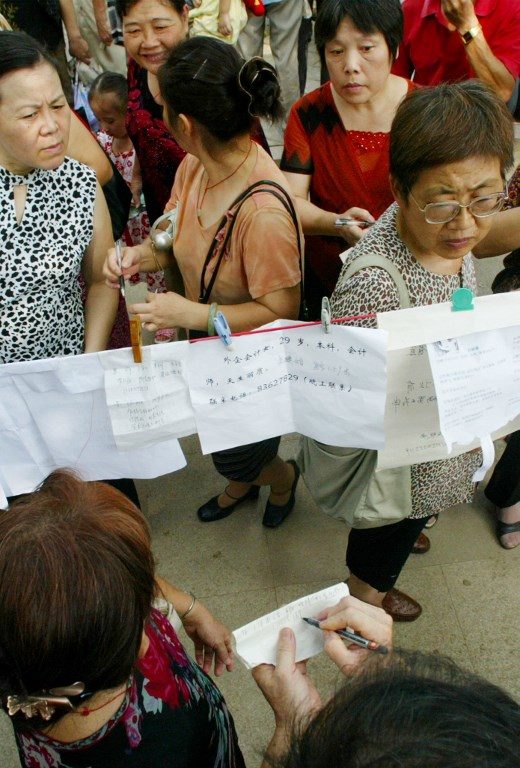 A generation of parents and grandparents has grown up in a different world but expect their children should still follow suit. Even the understanding parents of one of the interviewees find themselves in a bind.

“As an only daughter, June, is all her family has. Her parents are aware of how fierce the job market in China is, and they want to give her every opportunity to succeed and bring honour to their family. At the same time, they also know that if she generates too much success of too much honour, she runs the risk of alienating a potential father for their future grandchild; hence the hurry to get her hitched.”

Equally, many men want a homely wife, rather than an educated one. The sophisticated Ivy tells Lake that Chinese men want a wife who is beautiful, doting and wifely, hardworking and willing to turn a blind eye to cheating.

This is a light book on a heavy subject. Lake illustrates the giant demographic trends, through individual stories. She has a good eye for an image which explains a complex situation, like the demographics professor who explains the plight of the rural bachelors by saying it’s like wanting to go to the movies but the sessions are constantly booked out. For Chinese men often the only option is to import wives from Vietnam or Thailand.

The book has a good bibliography, which makes it surprising that Lake has found herself at the centre of a controversy with an author of an earlier book accusing Lake of failing to acknowledge her work.

Leta Hong Fincher is the author of Leftover Women: the Resurgence of Gender Inequality in China, which came out in 2014.

There has been a growing body of work on the effects of China’s One Child Policy and the skewing of its demographics. There is Mei Fong’s harrowing One child: the Story of China’s Most Radical Experiment on how a small group of men imposed choices on women, or novelist Ma Jian’s The Dark Road or Fincher’s book on Leftover Women.

Compared with these accounts, Lake’s book is an entertaining, quick read on “mating and dating”; fun to dip into but, at times, like a Chinese Sex in the City.

While Lake focuses on urban “leftover women” there are only tantalising glimpses of other groups; the desperate rural men have small walk-on parts and the urban men are glimpsed only through their usually fumbling encounters with the young women. Rural single women are also absent.

Leftover in China might have been better for throwing some light on other groups, so readers could judge the claims of the urban leftover women.

So how are the leftover women relevant to New Zealand readers? The rise of China is one of the biggest stories of this century and its skewed demographics is a fascinating story. As well, the problems of "mating and dating" have always fascinated readers from Jane Austen to Bridget Jones's Diary and they are fascinating in the Chinese setting, too.

In the end, Lake’s point is a good one. China has changed, but attitudes haven’t and it is the leftover city women who are bearing the brunt of that.

They face the difficulties of finding an equal mate, navigating parents who want them married and a society that expects them to be married in their 20s. They may be transforming China but it is tough.