Long before the accolades and attention, Kendrick Lamar told RNZ Music there was nothing phony about him and his stories of Compton, South L.A.

Ahead of Lamar's New Zealand shows in July, we revisit a 2012 conversation with the Pulitzer Prize-winning rapper, in which he spoke about being a 'kid from Compton' who was steadfast on remaining true to himself and his city. 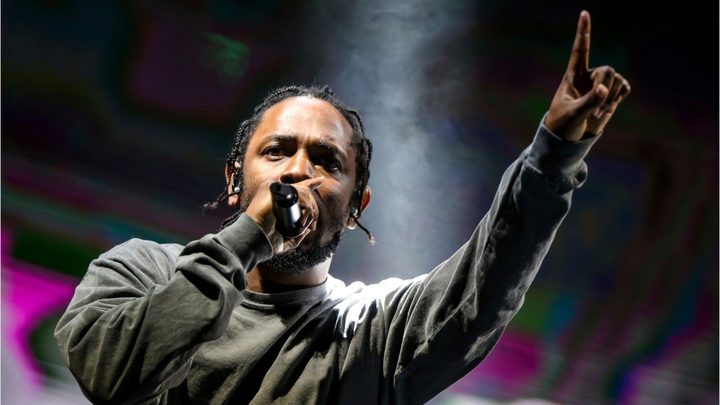 When Kendrick Lamar visited our shores back in 2012 for his first ever NZ show, he was clear about who he was: “Everything about my character is me,” he said.

“Ain’t nothing to really hide. Ain’t nothing that’ll come out five years, ten years from now that they’ll say ‘Okay he’s a phony’. You will never get that.

“I think my music represents my city a lot,” says Kendrick who hails from Compton in Los Angeles, California. “It’s a great weight of responsibility, but I think I’m up for it because I know the ins and outs.”

Kendrick – born Kendrick Lamar Duckworth in 1987, grew up in a city that was front and centre of West Coast hip-hop mythology.

Weaving tales of Compton’s gang-banging and crack cocaine-ravaged woes had been a lucrative pathway for Kendrick’s hip-hop forefathers including Dr Dre and 2Pac.

It's been argued that the musical stories of Compton and other US West Coast locales glorify the grim reality of its residents, providing a seductive and edgy form of musical voyeurism for fans who are worlds away from the bleak experience of Lamar and his cohort.

It’s something Lamar tends to agree with, though his purpose for making music is to stay true to his community.

“I was born and raised [in Compton]. I go through these neighbourhoods and they keep saying: ‘Keep telling the message, keep telling our story, keep putting a twist on it, rather than just glorifying it.’

“That gives me enough hope and enough encouragement to keep doing what I'm doing rather than let the media portray something they think just to sell records.”

Lamar’s early recordings and mixtapes document the reality he and friends faced in a locale dominated by gang wars and poverty.

The song ‘Sing About Me, Dying of Thirst’ from his major label debut Good Kid, M.A.A.D City articulates the contradictions and tension of being a young black man who aspires beyond what surrounds him, but inevitably falls into gang-banging, while witnessing his peers prematurely succumb to addiction, gun violence or jail.

The album contemplates the life choices that he and his friends face, which are limited by their location, the colour of their skin and economic situation. They're never free to follow their dreams as they're constantly compelled to respond to immediate good and bad, which are never distinctly apart in a place like Compton.

In that sense, their options are predetermined, contradictory and not always their own.

When he says his three greatest wishes are “peace, peace, and peace" it's as though he wishes for a reprieve from having to choose.

Kendrick confesses to being a spiritual person, using a shrewdly cheeky explanation: “If I stay on this Earth right now and say ‘I have faith’ and then die and there’s not a God, I didn’t lose nothing,” he laughs.

Against the advice of his elders, Lamar did encounter the troublesome side of Compton, acknowledging that 'a lot of these negative experiences' are part of the story of his success.

Unlike many of his peers, the constant presence of his father is why Lamar reckons he didn’t turn to gang life.

“The only thing that kept me from getting caught up was that my Pops was always around and active in my life,” he says. “He told me if I bump my head doing what I do, don’t come running back to him because he already told me.

"I went out there a few times, but then I saw my friends getting smoked and getting sent to prison for life, I realized how fortunate I was to have him around. Once I learned that, that’s when I got on my shit and stopped playing with life.”

Though some of his closest friends chose a different path to him: he recalls a conversation he had with one who was serving time, “I said, 'We was all influenced around negative people. You stay with the negative people, and now you in a negative space.’

“You’re only as good as the people you are surrounded around. I can’t be around some flunkies ... I told him: ‘Life’s that simple. It ain’t no crazy rocket science-type ideas to get where I am at.’

“I just wanna show kids out there that you can come from this negative place and do something positive with yourself.”

Learning that 'when [he] had positive energy around [him], positive things will happen' was a discovery that Kendrick has continued to apply throughout his career, which began in his teens.

“Once I got into my teenage years I fell in love with the sound of my voice when it came out of those speakers.”

His dedication and passion to his craft caught the attention of Top Dawg Entertainment label owner Anthony 'Top Dawg' Tiffith, who signed the youngster who then went by the rap name K.Dot.

“If I ain’t in the studio more than them I will be left behind on them tracks,” he reasons. "I ain’t gonna be better if there is no competition around me.”

“A person with hard work will beat anybody with natural talent any day. There’s always someone right there working out harder than you. You’ll be left behind.”

Far from being left behind, his subsequent releases have seen Lamar break new ground for a hip-hop artist.

His 2015 opus To Pimp a Butterfly was a both a critical and commercial success. The album made him the most Grammy nominated hip hop artist in one year (11 categories), only beaten by the 12 nominations for Michael Jackon's Thiller.

His latest release, last year’s DAMN. has seen the 31-year old become the first-ever hip hop artist to be awarded the Pulitzer Prize for Music.

David Hajdu, one of the judges of the prize, called DAMN. “A fearsome work of hip-hop that stands soundly, unapologetically on the virtues of its art form. It’s proudly unpretentious but nuanced musically and rhythmically, and lyrically multilayered."

On Kendrick's song 'Backseat Freestyle', from Good Kid, M.A.A.D City  –  the album he was touring when he spoke to RNZ Music, he raps, 'Kendrick have a dream.'

In the story of Kendrick Lamar, it seems that dreams do come true.

Tickets are available via Live Nation.